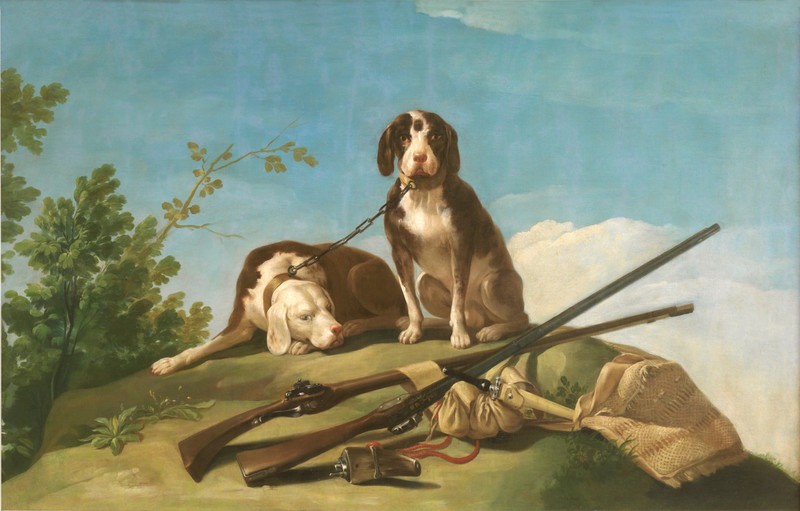 For the history of the whole series, see Wild Boar Hunt.

In addition to the different attributions made in relation to this series of cartoons and the documentation of Goya's authorship made by Sambricio, the work before us was also attributed to Antonio González Velázquez by Vicente López in the inventory that he carried out in 1834 for Ferdinand VII's will, and in 1870 it was attributed by Cruzada Villamil to Ramón Bayeu.

Around 1856 or 1857, the cartoon was moved from the Royal Tapestry Factory of Santa Bárbara to the Royal Palace in Madrid. In 1869 the work disappeared from the Royal Palace, along with six other tapestry cartoons (see Children with a Cart), being recovered by Don Raimundo de Madrazo, who bought it in Paris and donated it in 1895 to the Prado Museum (still with the attribution to Ramón Bayeu), where it is housed today but is not on show.

Two chained mastiffs, next to two shotguns and other hunting implements, in a landscape.

Thanks to the documentation provided by Sambricio we know for certain that it is the work of Goya, although most experts agree that it is one of his most impersonal works.

Because of their similar dimensions, and because both works are designed to be hung above a door or window, this cartoon is paired with Hunting with a Decoy.