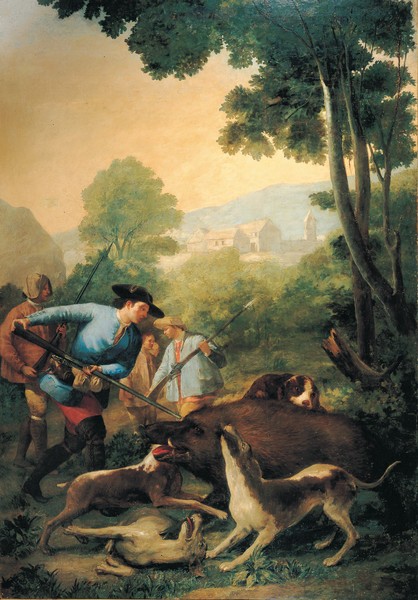 This work forms part of the series of nine tapestry cartoons made by Goya, under the supervision of Francisco Bayeu, for the dining hall of the Prince and Princess of Asturias in the palace of San Lorenzo de El Escorial. The painters completed two deliveries for the factory. The first was made on 24 May 1775 and consisted of five cartoons - this main scene plus the overdoors Dogs on the Leash and Hunting with a Decoy and the corner-pieces Hunter Loading his Shotgun and Hunter with Dogs. The second delivery was made on 30 October the same year and contained the following cartoons: The main scene Hunting Party, the corner-pieces Fisherman with his Rod and Boys Hunting with Owl and the overdoor Hunting Still Life.

All of the cartoons that make up this first series by Goya have been the object of various attributions recorded in diverse inventories. In 1780, Cornelio Vandergoten carried out an inventory of the paintings in the Royal Tapestry Factory of Santa Bárbara in which this series was attributed to Francisco Bayeu. Later, in an inventory completed in 1782, Vandergoten attributed them to Ramón Bayeu. The authorship of Goya appeared indistinctly alongside that of Bayeu in the inventory carried out by Livinio Stuyck in 1786. The paintings were finally documented and recorded as the work of Francisco de Goya by Valentín de Sambricio in 1946.

Around the same time (1946?) this painting of Wild Boar Hunt was moved to the Royal Palace.

A hunting scene comprising four hunters and four dogs attacking a wild boar, with the landscape of the Sierra de Malagón, in the Dehesa de las Radas, six kilometres from El Escorial Palace, in the background.

The style is similar to that of the cartoons by the Bayeu family, but one can observe a sfumato technique here, which would become characteristic of Goya's later work.