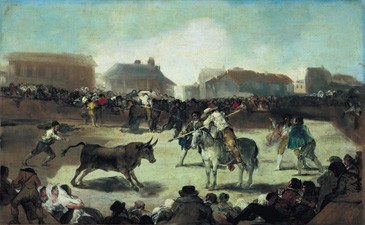 This scene of a popular festival, ostensibly a simple genre painting for decorative purposes, is actually another representation of the madness which appears to be the leitmotiv of this set of works. Goya was a great fan of bullfighting, as demonstrated by the numerous works of varying techniques with a bullfighting theme which he produced throughout his artistic career. Nevertheless, the excesses which characterized this kind of festival, attended by spectators of all classes, were also well known to him. In fact, from the time of Philip V onwards, various royal decrees motivated by enlightened thinking were passed which banned the killing of the bull, or even the spectacle itself. But official vetoes were ignored, and all kinds of people - clerics, youths, old people, young fashionable women - continued to attend this spectacle held all over Spain and New Spain in their droves. Audiences crowded around a bullring improvised with wooden boards in a plaza.

This is exactly what Goya has represented here. There is a row of houses in the background which suggests that the setting for this bullfight is a town, carried out in light, thin brushstrokes in greyish tones which blend in with the sky. The wooden ring which separates the spectators from the fight is perfectly visible, although the furthest away part from the viewer becomes a vague, ill-defined stain, like the houses and the figures in that part of the composition. Looking along the fence we can make out figures enjoying the bullfight arranged on both sides of a man who is sitting with his back to us, forming the central axis of the scene. In the middle of the ring, a picador (mounted bullfighter) gets ready to prick the bold bull, who is tense and alert. There are some bullfighters and, in the background, another picador.

Behind the seated figure in the right-hand corner whose body allows the reddish ground of the panel to show through, there is a woman looking at the viewer with wide-open eyes. Her face reflects the horror of the spectacle she witnesses, the only one aware of the brutality of the bullfight and the madness of the masses.