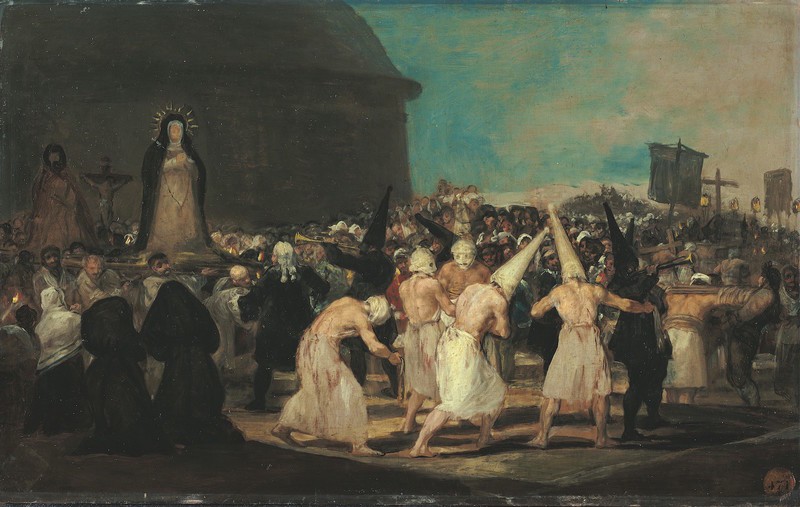 As in the case of the event represented in the painting The Bullfight,  processions of flagellants were also banned in Spain following the return of Ferdinand VII in 1815. In spite of this, religious fanaticism and fervour amongst the population continued, as did the penitent tradition. Goya saw these processions as another manifestation of the irrationality of the people, and he represents the scene with all the rawness and realism which he knew just how to capture.

The procession which Goya depicts here seems to be taking place in a large city, as indicated by the presence of the bailiff in his white wig who tries to maintain order. As viewers we are placed in the position of spectators in the public, and we have a perfect view of the flagellants who, bare-chested and barefoot, their heads covered with white hoods, lash themselves until blood springs forth, staining their white clothing. These figures are interspersed with others dressed in black from head to toe with black conical caps or corozas who play the trumpet while others castigate themselves by carrying heavy blocks of wood on their shoulders. The religious figures carried in the procession appear on the left-hand side, led by the Virgin of Solitude, and followed by a Christ on the road to Calvary and a crucifixion. The poses of the veiled women who kneel before the Virgin express devotion, and all those present are humbled by the sight of the penitents and their pain except for one person, who, like the woman who meets the viewer's gaze in The Bullfight, looks at us from the crowd, raising her head above the white caps with an eloquent expression of horror.