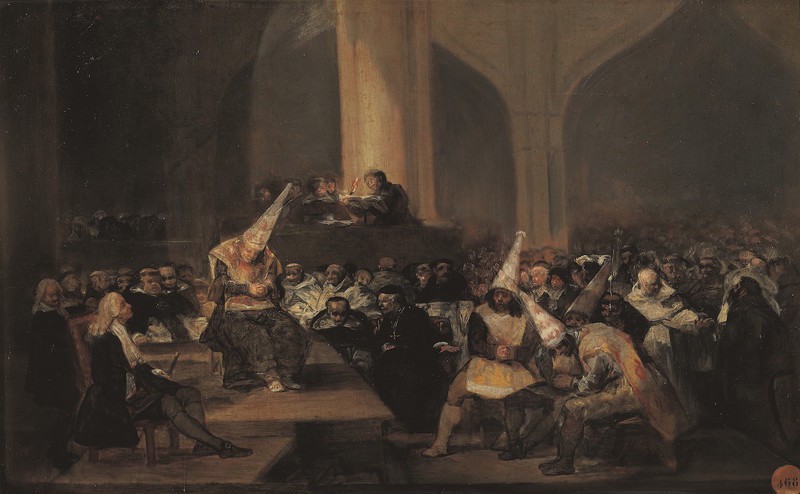 This painting reveals another moment of madness in Goyaesque society. Without a doubt this is the most macabre of the series: an Inquisition tribunal with its autos de fe (accusations of heretics), another spectacle considered fit for public attendance. The Sanctum Officium had been condemning heretics since the Middle Ages. Although the ritual was abolished by the Cádiz Cortes, it was re-introduced on the return of Ferdinand VII, and once more embarked on its particular brand of persecution against liberals and francophiles, mixing political and religious motives. Goya himself was asked to justify his paintings The Naked Maja and The Clothed Maja. Criticism of the Inquisition and its extreme and unjust sentences thus became a partly personal theme for the artist, although Goya was always concerned about irrationality of the society in which he was living.

The numerous spectators watching the event, their heads lost in the gloom of the depths of the room, are gathered around a podium in a medieval hall with enormous ogee arches typical of public buildings. Raised up on a platform is a cleric who is reading the sentence, and on the same level on the left-hand side we can make out veiled women. The scene is dominated by the magistrate, identifiable by his dress. He is comfortably seated on the left, as if he were attending a poetry recital, his gaze is directed at one of the four condemned. Their bodies twist in panic as their sentence is dictated. They are wearing the penitential sanbenito garment and coroza or conical hat decorated with flames which anticipate their impending death by fire. Behind them are seated religious figures from various orders identifiable by their habits - Dominicans, Franciscans, Carthusians, and so on. In the very centre of the composition, the great inquisitor makes an implacable gesture, as if he were a Roman emperor who held the life of a slave in his hands.

As in the other paintings in the series, Goya's criticism in this painting consists simply in faithfully portraying the events of these autos de fe, which continued right up to the end of the bloody Inquisition in 1834.