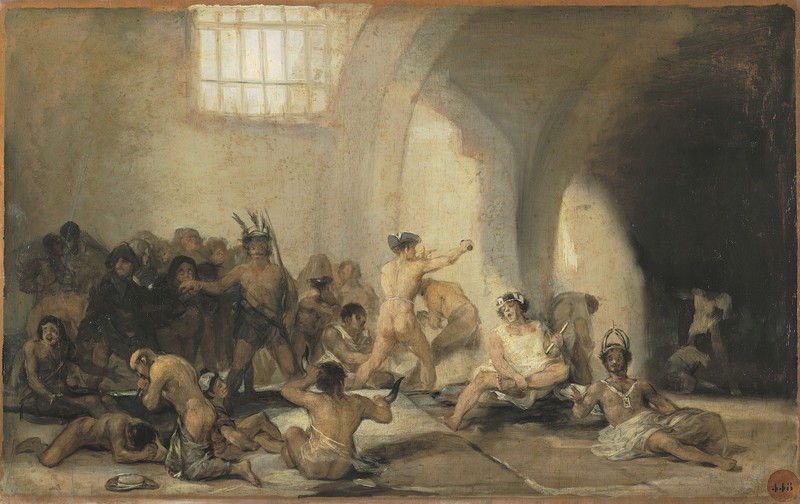 The 1828 inventory drawn up by Brugada on Goya's death details Four small paintings of festivals and traditions, which have generally been identified as the series of four paintings on panels comprising The Madhouse, The Bullfight, A Procession of Flagellants, and The Inquisition Tribunal. The exact date when this series was produced is not known, but judging by the clothing worn by the figures represented and the painting style, they are estimated to have been produced circa 1814-1816.

The series belonged to Manuel García de la Prada, a friend of Moratín and Goya, who was Mayor of Madrid during the Napoleonic period until his exile to France in 1812. He might have acquired the works directly from the painter before Goya left for Bordeaux. Another possibility is that he bought the works from Javier Goya after the painter's death, and in this case they can indeed be linked to the reference in the inventory. In any case, the series became part of the collection of Manuel García de la Prada in Madrid some time before 1836, the year when they appear in his will, bequeathed to the San Fernando Royal Academy. They were entrusted to the institution in 1839 on the former owner's death.

The four paintings in this series were carried out on mahogany. The particular variety employed came from Cuba, and was generally used for packing boxes and the transport of goods. Given that trade links with America had been re-established and Goya's father-in-law was in that business, it is possible that Martín Miguel de Goicoechea himself provided the artist with the wood.

Although some of the images depict festive scenes, it seems that in these paintings Goya actually presents the viewer with four different facets of madness, a theme which he had already dealt with on other occasions, such as in the oil on tinplate The Yard of a Madhouse. The subjects of these paintings are also strongly linked to the idea of "black Spain".

The Madhouse could be the first scene in the series, since it is an explicit representation of madness, and because Goya has maintained margins on all four sides of the painting to avoid losing this part of the composition when framing the panels, a detail which he neglected in the following works in the series. The scene takes place in a vaulted prison with high, barred windows. The composition is peopled by a series of naked or semi-naked figures arranged horizontally. Their incoherent postures and gestures indicate the dementia which has led them to be imprisoned there. The artist included some details which help to distinguish the different social classes that he wished to depict, all of them made equal by their nakedness.

Thus, the illiterate and lazy are portrayed as if they were attending a bullfight, as in the case of the madman with his back to us who is holding some lances, and the bullfighter who is on the point of jabbing a fellow inmate. The Church is represented by the figure on the right, characterized as a pope, crowned with a kind of improvised tiara and wearing a scapular fashioned from a playing card, who is making a blessing with his right hand, his eyes blazing. Behind him, we can see an emperor character wearing kind of toga and a crown of cards with a sceptre in his hand. There is a wild chief standing, sporting a crown of feathers and armed with what seems to be a bow; he is surrounded by a band of followers and admirers, including a faithful servant, a fanatic nun, a hooded monk and other sketched figures. He is very likely to constitute a parody of the king of Spain. At the centre of the composition, also standing, is a totally naked man with his back to us whose head is covered with a three-cornered hat. He points to the back of the scene, as if he was getting ready to launch an attack on his enemy. There are other figures which complete the range of social classes: a peasant with a hoe, and some inmates distracted by the pleasures of the flesh.

This fierce criticism of society seems to be a symptom of the anger and sadness that Goya must have felt when the absolute power of Ferdinand VII was restored.