Serie
Cardboards for tapestries: Hunting scenes (painting and drawings, 1775). Dining room of the Princes of Asturias, El Escorial (7b/9) 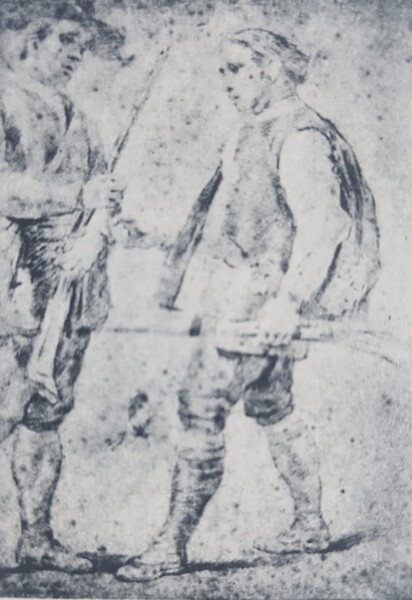 This is a preparatory drawing for the tapestry cartoon Fisherman with his Rod. The work was destroyed in the fire at the Jovellanos Institute in Gijón on 21 August 1936. It was registered under number 382 in the catalogue created by José Moreno Villa in 1926, Dibujos del Instituto Jovellanos de Gijón.

The back of this drawing featured another preparatory drawing for the tapestry cartoon The Picnic. It is interesting to note that these two sketches are found on the same sheet of paper, since they correspond to two cartoons which were delivered to the Santa Bárbara factory a year apart.

We see the two hunters, duck in hand, which appear in the middle ground of the cartoon of the fisherman. Sambricio highlights the realism and expressiveness of the faces, which are more accentuated here than in the painting. This drawing stands out from the rest of the studies in this series of cartoons owing to the marked chiaroscuro: the contrasts of light and shade along with the highlights in white chalk model the figures in the image.

Some additions are made in the definitive work, such as the shoulder bag and handkerchief typically carried by hunters - in this case the figure on the right - as well as some omissions, such as the left-hand figure's sideburns. The differences in details between the drawing and the cartoon confirm that Goya deferred to the demands of his brother-in-law, Francisco Bayeu, since these are not changes in style; rather, they seem to be changes dictated by the latter's personal criteria.