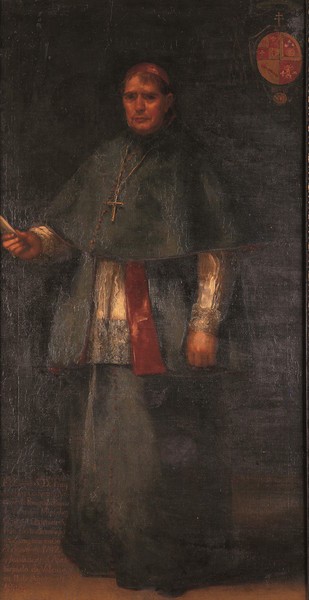 Goya (on the paper that the sitter is holding in his right hand).

The Franciscan Joaquín Company y Soler (Penáguila, Alicante, 1732-Valencia, 1813) governed the diocese of Zaragoza from 1797 to 1800, the year in which he was named Archbishop of Valencia. As well as holding the most important posts in his order, he was a first-class Grandee of Spain and consultant theologian to the Royal Council of the Order of Charles III, a member (1797) and director (1797-1800) of the Aragonese Royal Economic Society of Friends of the Country, and president (1798-1800) of the Royal Academy of Fine Arts of San Luis, Zaragoza.

This portrait would have been made at the request of the archbishop following his appointment to the seat of Valencia (in August 1800), some months after Goya's promotion to the position of First Court Painter (in 1799). The sessions from life would have taken place in Madrid, from where the finished painting would have travelled to Zaragoza to take its place in the portrait gallery of the archbishop's palace.

The subject is shown full length and standing, his body turned slightly to one side but his head looking straight out at the viewer. His right hand is raised, and holds a paper bearing the signature "Goya". He is wearing a cassock, rochet, short robe and cape, and a skullcap covers his head. On his chest hangs a simple cross. In the upper-right corner is the family coat of arms with the tassels of archbishop. The figure is shown in an empty, neutral space. The only definition in the dark background is that provided by the shadow cast over the floor by the subject himself.

Of the two inscriptions, the first and the original is two lines at the base of the painting, now partially covered by the frame. The second, which is perfectly visible, runs to twelve lines and is located in the upper-left corner. It repeats, with some small differences, the biographical information given in the first inscription, except for the references to King Charles IV and Pope Pius VII.

The Prado Museum holds a sketch for the head of this portrait. There was a copy or replica of this painting in the chapterhouse of the Church of San Martín in Valencia but it disappeared during the Spanish Civil War (1936-1939). In addition, in the Speed Art Museum in Louisville (USA) there exists a bust portrait, but its attribution is widely disputed.