Serie
Cardboards for tapestries: The Madrid fair (painting and sketches, 1778-1780). Bedroom of the Princes of Asturias, El Pardo palace (2/7) 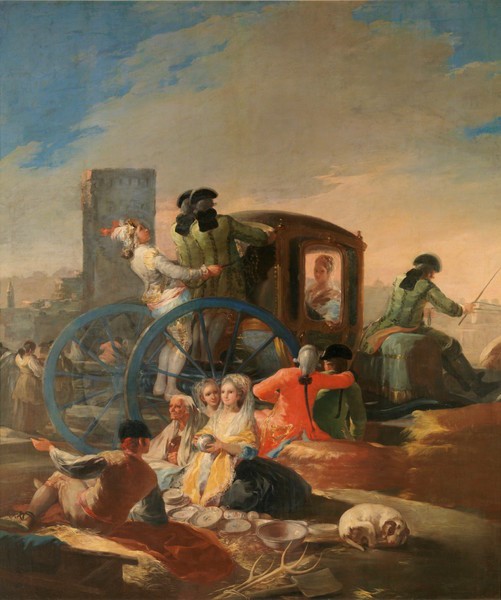 The tapestry of this cartoon would have hung on the west wall of the royal bedroom, opposite its companion piece, The Fair at Madrid.

In the foreground we see a group of women buying wares from the pottery vendor, who has been carefully rendered against the light. Behind them, a carriage is crossing the street, with a lady inside and her footmen holding on to the rear. In the image, the static quality of the first group contrasts with the dynamism of the second, accentuated by the movement of the page who appears to be bent backwards by the speed of the carriage. Camón Aznar sees in this visual contrast something more profound: the difference between two worlds - that of the common people and that of the lords and the nobility.

The world of the nobility is embodied in the portrait of the lady, who turns her melancholic gaze outwards towards the viewer from inside her richly-decorated carriage, whilst she is in turn observed by two gentlemen outside. The woman, who is depicted using a looser technique, is framed by the window and becomes the object of admiration of the two men. It has been suggested that this is the same woman who appears in the painting being scrutinized by the connoisseur in the companion cartoon, The Fair at Madrid.

Of special interest is Goya's skill in depicting still lifes, as can be seen in the crockery laid out on the ground and being handled by the women. Among the items, some Alcora ceramic pieces have been identified, coveted at the time as objects of luxury.

The expressiveness of the faces stands out here, especially that of the old woman accompanying the young lady, recalling the witches that Goya would later come to paint.

It is easy to see where the artist changed his mind about the position of the carriage wheel, which he ended up moving to the left. This was probably due to a lack of space, since even after the modification the composition ends somewhat abruptly at the coachman's feet, whilst the only visible sign of the horses are the hindquarters of one of the animals.