Serie
Cardboards for tapestries: The Madrid fair (painting and sketches, 1778-1780). Bedroom of the Princes of Asturias, El Pardo palace (1/7) 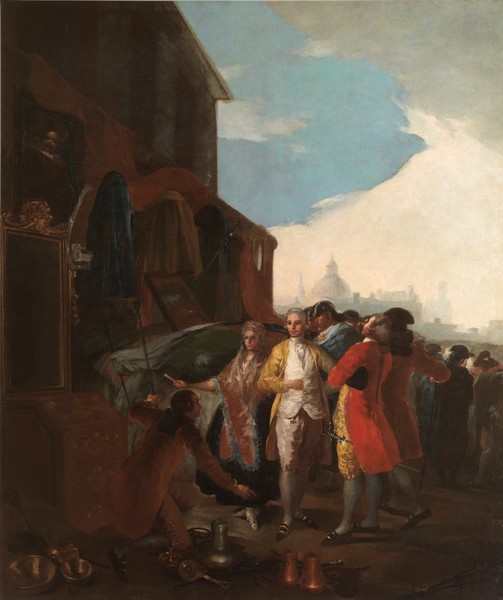 This work forms part of the series of seven cartoons on the theme of the fair for tapestries designed to decorate the bedroom of the Prince and Princess of Asturias in the palace of El Pardo.

On 2 October 1777, Goya was sent two lists with the dimensions of the tapestries that were to decorate the royal chambers. The first contained seven pieces for the bedroom itself and the second listed thirteen to be hung in the antechamber.

On 6 January 1779, Goya delivered an invoice to the Royal Tapestry Factory for six new cartoons: The Fair at Madrid, The Pottery Vendor, The Soldier and the Lady, The Haw Seller, Boys Playing at Soldiers and Children with a Cart. A seventh cartoon, that of The Blind Guitarist, the tapestry of which was also to form part of the decorative scheme of the bedroom but which ended up being displayed in the antechamber to the bedroom, was delivered to the factory on 27 April 1778. We must assume that the six aforementioned cartoons were made during the period between the two deliveries of 27 April 1778 and 6 January 1779. A letter from Goya to his friend Martín Zapater dated 9 January mentions "four paintings" that were particularly well received by Charles III and the Prince and Princess of Asturias. The letter does not specify which ones they were but, given that the delivery was made just three days before Goya wrote this letter, it is very likely that he was referring to some of the works in this series. It is no surprise that the paintings pleased their Majesties, since the theme of Spanish types was a favourite among the ilustrados.

The tapestry of The Fair at Madrid would have hung on the east wall of the royal bedroom, opposite that of The Pottery Vendor.

It is one of Goya's most acclaimed cartoons. It depicts a scene in which a nobleman and woman are entering the fair and are looking at the stand of an antiques dealer. They are accompanied by a connoisseur, who is peering attentively up at the paintings through his spectacles. The iridescent highlights on the gentleman's clothes and the fine detail on the lady's shawl are very worthy of attention, along with the skilfully rendered metals in the still life that is spread out in the foreground. All of these effects would have been difficult to transfer to the tapestry. In contrast to the strong light falling on the elegant couple, the antiques dealer is deftly painted against the light.

In the background, subtly standing out against the afternoon sky, is the outline of the dome of the church of San Francisco el Grande. This landmark, which appears again and again in the works of Goya, was newly built at the time, having been finished only shortly before 1777.

The scene is set on the traditional site of the city's annual fair, where the Rastro flea market is held today, in Madrid's Ribera de Curtidores and Plaza de la Cebada.