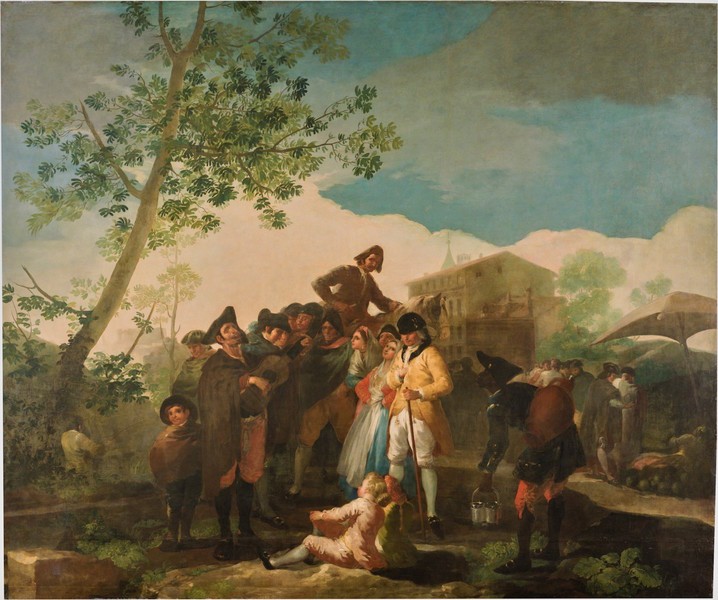 This work forms part of the series of thirteen cartoons for tapestries designed to decorate the antechamber to the bedroom of the Prince and Princess of Asturias in the palace of El Pardo.

On 2 October 1777 Goya received the list containing the dimensions of the tapestries for said room, along with those for the tapestries that were to decorate the bedroom itself, and which were completed first. The subject matter for both rooms was the same: popular Spanish "types", a theme that was very much in fashion thanks to the publication, in 1772, of Viage de España, written by Antonio Ponz, and very popular among the ilustrados. The fact that the theme is maintained in the later works, to be displayed in the antechamber, implies that the seven cartoons for the bedroom proper were well received by their Majesties, and this is indeed confirmed by the letter that Goya wrote to Martín Zapater on 9 January 1779.

The tapestry resulting from this work was initially designed to decorate the north wall of the bedroom (which was finally occupied by another tapestry, A Stickball Game. It was delivered on 27 April 1778, ahead of any of the other pieces in the series. Six months later, the cartoon was returned to Goya at the orders of the architect Francisco Sabatini, in order for some modifications to be made, since the design was proving to be a difficult one to transfer to the tapestry. During the period of time between its return and the final delivery (the date of which we do not know but that we suppose was after the delivery of A Stickball Game in July 1779 and before March 1780, when the production of tapestries at the Royal Tapestry Factory was suspended), it was decided that the location of this cartoon would be changed to the antechamber and Goya was thus forced to reduce its width considerably.

The scene represents Madrid society of the time, with the character of the blind man singing couplets dominating the composition. Such a figure was common in the Madrid of the 18th century. Around him are a foreigner or a gentleman, majos, vendors, cloaked men, children, etc. Vandergoten has identified the location as the Plazuela de la Cebada, in Madrid, since the painting reminds us of the Madrid fair, held in this place, and because the theme of the fair is the common thread running through this series of cartoons.

The part affected by the modification mentioned above is the left-hand side, where the print of the same name shows a native of Murcia pulling oxen, just as can be read in the description that Goya included when he delivered the first version of the painting. The final version of the cartoon shows a tall, highly-decorative tree on that side, and at its foot a fisherman with his rod facing away from the viewer, which does not appear as appropriate a motif as the one that was removed. The number of figures on the right-hand side was reduced and the background with the houses was modified. The central group of the scene was kept intact, however.

Of all the figures, the black water-seller stands out, bent under the weight of his load. Goya dedicated some drawings to this figure but, unfortunately, they are now lost.

This is the only case in all of Goya's tapestry cartoons in which the artist decided to make a print of the original composition, almost certainly because he was very satisfied with the work. Although the print is not a faithful reproduction but rather a version of this cartoon, it helps us to imagine the appearance that the original would have had. Some writers, including Valeriano Bozal, have expressed the opinion that if we are to trust the etching that Goya made to reflect his original idea, the result following the changes is happier and more realistic.