Serie
Popular Themes (Temas populares). Thirteen cartoons for tapestries for the antechamber to the bedroom of the Prince and Princess of Asturias in the palace of El Pardo (2/13) 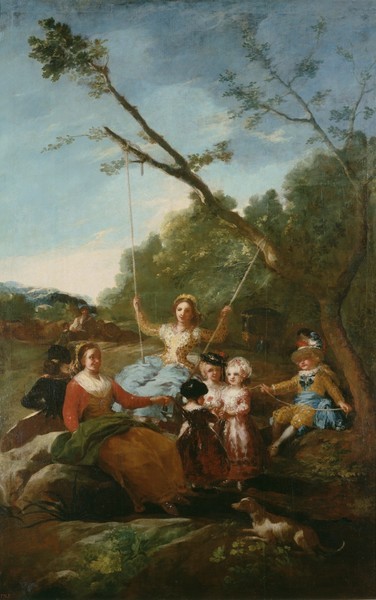 This cartoon was delivered to the Royal Tapestry Factory, together with A Stickball Game, on 20 July 1779.

The tapestry of The Swing was hung on the north wall of the antechamber to the royal bedroom, along with The Washerwomen, the overdoor pieces The Woodcutters and Majo with Guitar and the corner-pieces Boy with a Bird and Boy and a Tree.

Goya describes this cartoon as depicting a family, with four children and three maids, out enjoying themselves in the countryside. One of the women sits on the swing and forms the topmost part of the pyramid composition.

There has been talk of the influence of French rococo in this work, due to the image of the swing, although Sambricio is of the opinion that there exist many differences between this cartoon and French works on the same subject.

Tomlinson states that The Swing is a representation of the three ages of man, personified by the children, the young maid on the swing who looks out towards the viewer, and the older maid, dressed in red, who observes the ages through which she has already passed. The same author also reminds us of the sexual connotations of the swing, which would symbolize female fickleness, and its rising movement, symbolizing the sexual arousal provoked by women. Two male figures are indeed present further back in the composition, watching the women, as occurs in other cartoons such as The Haw Seller or The Soldier and the Lady, where Goya testifies to the availability of the woman, and perhaps to her vulnerability, too. Here, though, the effect of Goya's work is more sombre and the figure pushing the young woman on the swing is a c and hild, and not a suitor as occurs in other cases.

The darkening of the pigments caused by the reddish preparation employed by Goya is particularly evident in this cartoon.