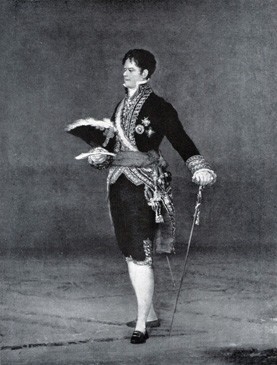 Some writers claim that this work could be a reduced-size replica of the official portrait, made by the painter for the duke's personal collection. The work was later in the collection of the Marquis of La Torrecilla, in Madrid, and then in that of the Marquis of Santa Cruz, also in Madrid, who was a descendant of the sitter.

The reduction, considered by some scholars to be an autograph work by Goya, reproduces all of the details of the original work exactly, albeit without achieving the masterful execution of the first portrait. The shapes are less defined, and the facial features are not captured as gracefully. The fundamental compositional difference between the original and the reduction, however, lies in the relationship between the figure and the surrounding space, since this painting is of a wider format and the duke appears somewhat isolated in the vastness of the unfurnished, objectless room in which he is depicted. The inscription that appears in the first version is also missing from this work.