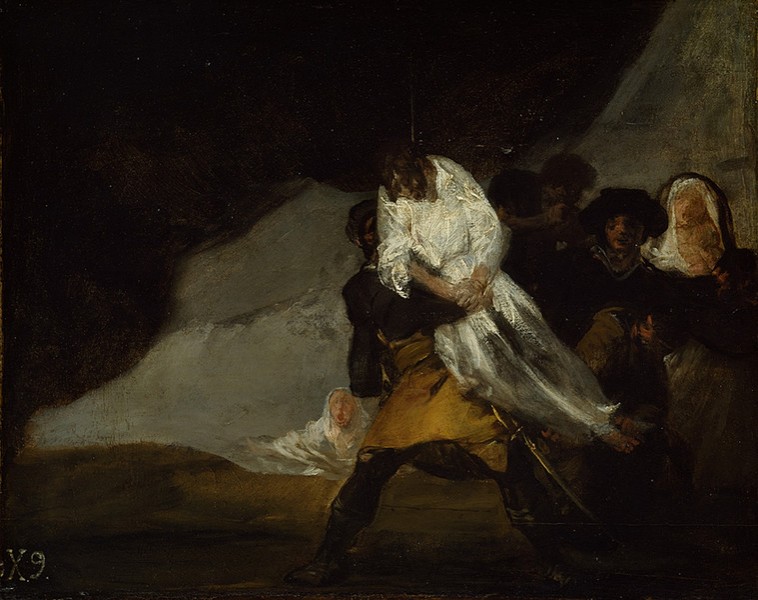 X.9 (in white oil paint in the lower left-hand corner of the canvas).

This work has been the property of the Duke of Trévise, in Paris, and has been in the collection of the Baron Adolf Kohner, in Budapest.

There are reports of the existence of two other versions of this work. The first of these is in the Barroilhet collection, Paris, whilst the second is in the Zuloaga collection, Zumaia, Spain.

This work, together with a total of six others (of which five have been identified), would have belonged to a set of works which all featured the inscription "X.9". This inscription was given to these canvases in the inventory of Josefa Bayeu's estate, carried out by Brugada in 1812.

We see a group of people watching as a man whose face is covered lowers the body of a monk, who has been hanged. Their faces have been only superficially rendered, although it is possible to appreciate the expressions of anguish which they bear.

This scene takes place in an indefinite, dark space, as if it were happening at night, almost clandestinely. However, two of the figures seem to positively emanate light: the hanged man, dressed in a white tunic, perhaps in allusion to his innocence; and a figure covered by a veil, in the lower centre of the canvas, wearing an expression of horror on her face and with her mouth agape.

Goya, who painted this work during the years of the Spanish War of Independence, would almost certainly have witnessed executions of this sort, and he went on to denounce them on several different occasions throughout his life. Just as in some scenes from the Disasters of War series of etchings (no. 2, With or without reason and no. 15, And it can't be helped, for example), here he has painted the executioner with his face hidden, in this case behind the body of the hanged man.