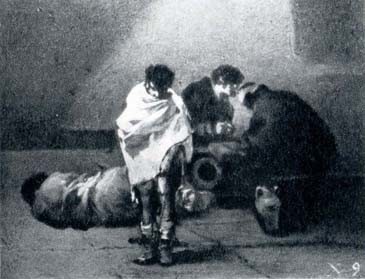 This painting arrived at the Monastery of Guadalupe thanks to the donation of a private individual and was brought to light by Xavier de Salas in 1964.

This work, together with five other canvases, has been marked with the inscription "X.9". This is a reference to the number they were assigned in the inventory of Josefa Bayeu's estate which was made in 1812.

In front of a neutral background, a man, facing the viewer and in the foreground, covers himself with a beige blanket. Below this blanket, however, the shackles on his feet are still visible. In the background, a second man is seated, his hands bound. Next to him, on the ground, another figure is lying on his side, also apparently with his feet tied.

The dark setting and the inability of these three people to move create a static atmosphere which communicates the sensation of impotence provoked by this loss of liberty.

The scene emanates with the violence - psychological as well as physical - to which those people detained in the prisons of the time were subjected.

The Aragonese artist, both in this work and in a number of etchings in the Disasters of War series, as well as in other paintings such as Interior of a Prison, shows his disagreement with the punishments used within the prison system, probably after reading texts like Dei delitti e delle pene (1764), by Cesare Beccaria (Milan, 1738-Milan, 1794).