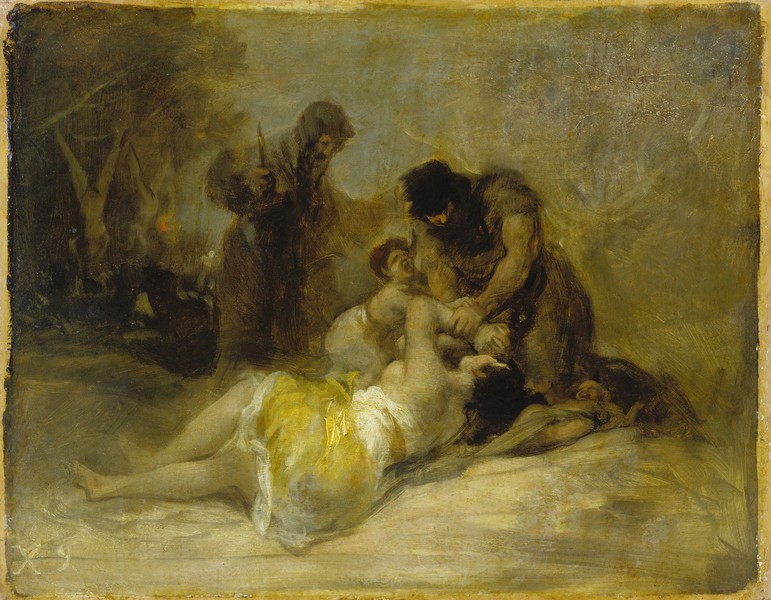 This work came from the Lafitte collection in Madrid, later entering the collection of J. Böhler, in Munich.

At least one replica of this work is known to have existed in the Leeb collection, in Paris. Another version of the painting was sold by Christie's on 5 December 1969.

This work belongs to a group of paintings which have each been marked with the inscription "X.9". This is a reference to the number given to them by a notary as part of the inventory which was carried out in 1812 following the death of Josefa Bayeu. Xavier de Salas, who has identified five of the six works marked with this "X.9", believes that all of these works are based on the same theme, increasing the likelihood that they would have been considered as a homogeneous set of works. They depict diverse episodes, all marked by pessimism or violence, and all based on the period of the Spanish War of Independence. It is thought that the sixth painting marked with the inscription "X.9" could be Monks Throwing Books and Papers on the Fire (Monjes que echan libros y papel al fuego), described in 1896 by Araujo Sánchez, along with Scene of Kidnapping and Murder and Women Attacked by Soldiers.

Here we see a woman being attacked by bandits. One of these men, thoroughly absorbed in what he is doing, stands with a knife in one hand and uses the other to cling on to a woman by the arms. In her struggle to get free, some of the woman's clothing has come loose. Watching this scene is the woman's son, who tries in vain to protect his mother. Behind the woman's head we see a new-born baby lying on the ground, crying.

Goya showed his repulsion for these atrocities committed against women, especially during wartime, on numerous occasions. His Disasters of War series of etchings features several images depicting scenes of cruelty against women. In no. 4, The women give courage (Las mujeres dan valor), and in no. 11, They don't want to (No quieren), for example, the artist shows us situations similar to those of Scene of Kidnapping and Murder and Women Attacked.