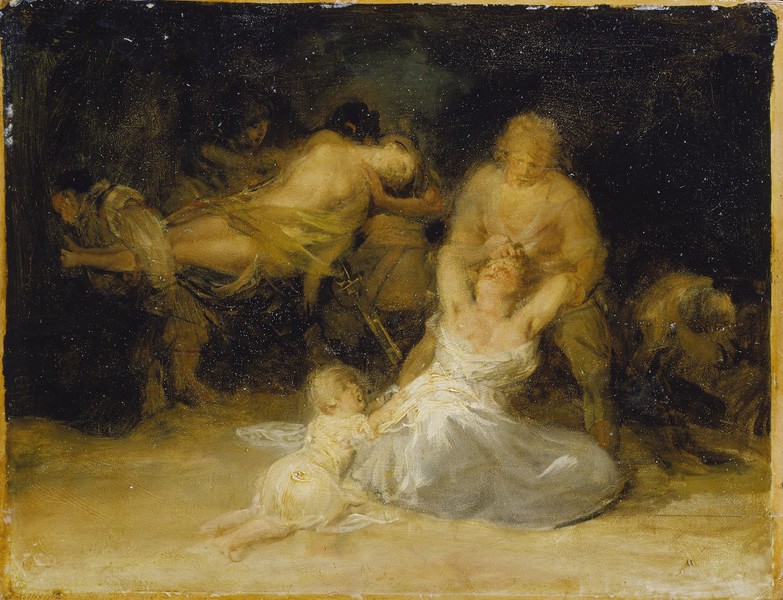 There may have existed a number of replicas of this painting. One of them belonged to Salas in Madrid, and was published by Lafuente Ferrari in 1947. Another, which was in a private collection, is mentioned by Gassier-Wilson, who listed it as a copy or a replica. A third replica may be the painting which is exhibited as an autograph work at the Museum of Fine Arts in Seville, although such an attribution has come under scrutiny.

This work, together with five other paintings, has been marked with the inscription "X.9", a reference to the number assigned to them by the notary in the inventory of Josefa Bayeu's estate which was made in 1812.

The painting follows the same formal and thematic lines as the previous work (Scene of Kidnapping and Murder). The scene depicts women being subjected to violence at the hands of bandits. In the foreground a man has hold of a woman by her arm and by her hair, whilst her son, at her feet, tries to pull his mother towards him. In the background, Goya has painted a woman who, judging by her pallid skin, is already dead, and is being carried along by several men.

To depict this woman Goya may have used a drawing which he himself copied from John Flaxman (York, 1755-York, 1826) and which is housed at the National Library in Madrid.

Goya has made use of warm colours and has painted the bodies of the protagonists with great luminosity. Those of the women, in particular, appear to be radiating light and thus to be emerging from the very dark, neutral background.

The brutal way in which the female bodies have been treated, the tendency towards a warmer colour palette and the dramatic intensity of the scene all encourage a comparison between this painting and The Death of Sardanapalus (1827, Musée du Louvre, Paris) by Eugène Delacroix (Charenton-Saint-Maurice, 1798-Paris, 1863).