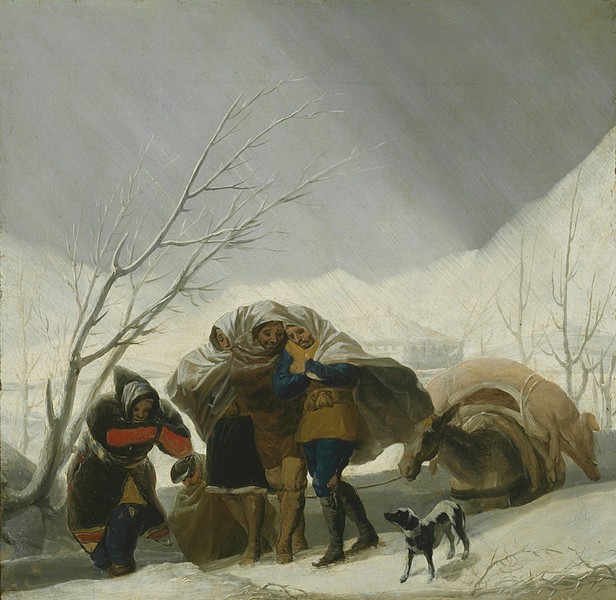 Sketch for the tapestry cartoon The Snowstorm.

This sketch was made by Goya in autumn 1786, to be shown to the king for his approval. A document certifies that the artist requested payment for a carriage to take him to the palace of San Lorenzo de El Escorial expressly for this purpose.

The work was acquired by the ninth Duke of Osuna in 1799. In this collection it appeared under the title of Winter. It went on sale in 1896, at the time of the bankruptcy of the ducal household, by order of the executive bondholder board, and it was bought for the Demotte collection in Paris for the sum of 2,000 pesetas.

In the years that followed, it was in the collections of Desparmet, Cerbera, E. A. Silbermann of New York and Everett D. Graff of Chicago before arriving at its current home. In 1990 it was left to the Art Institute de Chicago.

According to Arnaiz, of all the sketches that compose this series of works on the four seasons, this is the one with the loosest and most abbreviated execution. Goya's interest in representing the snowstorm is evident and he does so through the use of glazes which were later to disappear for the finished tapestry cartoon, where the cold and wind are instead evoked through the sensations and postures of the figures.

The sketch shows three figures covering themselves with a single blanket whilst they drearily trudge along the path. Tied around the waist of one of the figures we can see some small bags of money - so small as to apparently not have held enough coin to buy provisions ahead of the oncoming harsh winter. About to collide with them we see another figure, almost certainly a servant returning to his lord's home, with another companion who pulls along a mule laden with a dead pig. In the background is the silhouette of a house, probably belonging to the village that the walkers have just left. The differences between these two social groups are evident.

In the finished cartoon some details change: there are no houses in the background and the space between the two groups is enlarged, making the landscape appear much vaster and more desolate.

Gudiol is of the opinion that this is a sketch made from life and that the differences carried over into the cartoon were the result of Goya realizing that he would need a wider perspective in order to obtain a panoramic view and that the grey sky would need to contrast more strongly against the white snow.