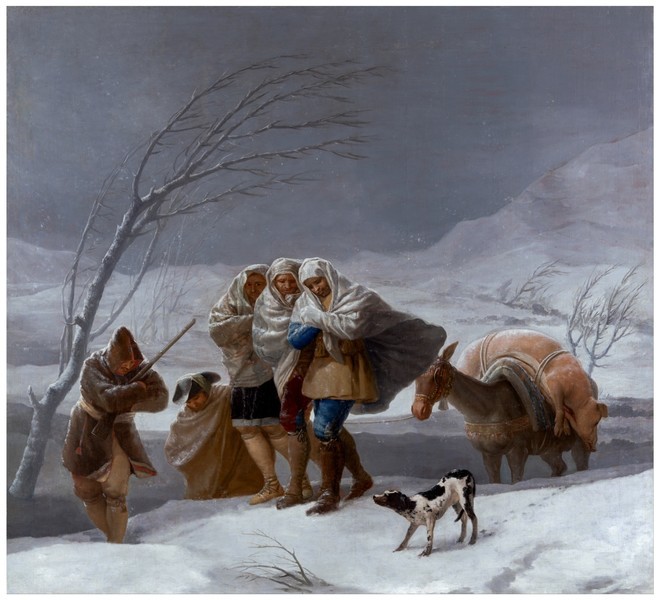 The tapestry of The Snowstorm would have hung on the north wall of the room, flanked by the overdoor pieces Shepherd Playing a Dulzaina and Hunter beside a Spring.

Five men attempt to cross a bleak frozen landscape, struggling against the force of the snow and wind. They protect themselves from the cold with blankets and hoods and in their faces we can see their effort and discomfort. Behind them, a hooded man pulls along a mule laden with a dead pig, an animal connected to winter since the time of its slaughter used to mark the beginning of the cold season.

We can see a radical change between the cartoons Goya painted previously and this winter trilogy. The artist has abandoned the theme of the fair, the pleasant views, the flirting between majos and majas, etc in order to show the viewer the less fortunate side of society: the poor, the peasants and the workers. This realist vision of society was more befitting of literature and we can find a close parallel with these paintings by Goya in the work of the poet Juan Meléndez Valdés.

Goya was also breaking ground with the way he chose to represent winter, eschewing the use of traditional iconography, which tended to depict two old men warming themselves and protecting themselves from the two elements that dominate this season: the wind and the cold. The sublime nature of the landscape is evoked through the whiteness of the snow, the force of the wind that bends the branches of the trees and whips against the capes, and the cold that forces the figures to wrap themselves up tightly. Seasonal sensations are expressed better in this season, winter, than in any of the others.

Arnaiz confirms that the man on the left of the group of three, who is looking out at the viewer, is almost certainly a self-portrait of the artist.