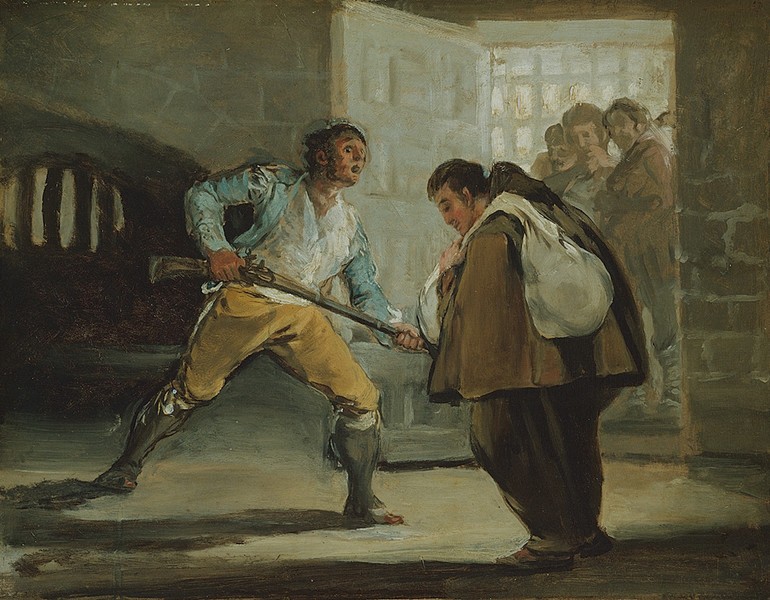 Goya produced this series of six paintings to record the celebrated capture of the bandit "El Maragato". They stayed in his possession, as reflected in the inventory drawn up on the death of Josefa Bayeu in 1812, and were then inherited by Javier Goya.

On 7 March 1861 the Laffite collection to which the paintings belonged was put up for sale at the Hotel Drouot in Paris (lot no. 34), but they remained unsold until 1911 when they were acquired by Julius Böhler from Munich. Until 1928 they belonged to the collection of Martin A. Ryerson of Chicago, who donated them to the Art Institute of Chicago in 1933.

The story of the dreaded Pedro Piñero, better known as "El Maragato" captured the public's imagination when Friar Pedro de Zaldivia managed to escape from harm's way and capture him on 10 June 1806. The bandit had been condemned to death for his crimes, although his punishment had been substituted for forced labour in the armoury of Cartagena, where he was taken in 1804. He managed to escape, and he reached the west of Toledo, seizing arms and committing further robberies on the way. On the day of his capture, he had entered a house in El Verdugal in Oropesa, where Friar Pedro arrested the fugitive. He was sent to Madrid, where he was hung and quartered on 18 August. The religious man's exploits were made known in poems and popular prints. Goya also had a part in this dissemination with his cycle of six paintings on panel, designed as a predella altarpiece, compared on some occasions to a film storyboard.

This set of images reflects a change in Goya's view on society and the world. There is a distancing from his previous works depicting elegant dandies and picaresque young gentlemen and women. Popular realism can already be traced in Goya's work, even before the Napoleonic invasion. The Maragato and Friar Pedro de Zaldivia cycle represents the most brutal depiction of the people produced by Goya prior to the works directly linked to the War of Independence.

In order to follow every detail of the events of that morning in June, it is important to take into account the leaflet published in Madrid a month later. Goya used it as a source for the design of these scenes, although these display many alterations which suggest that the works were carried out in a rather spontaneous, even experimental way. The setting, sketchy in its execution, is different for each panel, since the artist adapted it to the figures of the two protagonists, who are precisely drawn and full of energy and spontaneity. The result is a series of images with a strong popular feel and touches of humour, interspersed with the great dramatic moments and gestures appropriate to historical painting.

This first image in the series portrays the meeting between the bandit and the monk, in the moment when the criminal has imprisoned the members of the household in a room and seized the chief guard's horse. El Maragato threatens the monk with his rifle before imprisoning him with the others in a room. We can see the door of that room in the background, the captives peering in from the doorway.