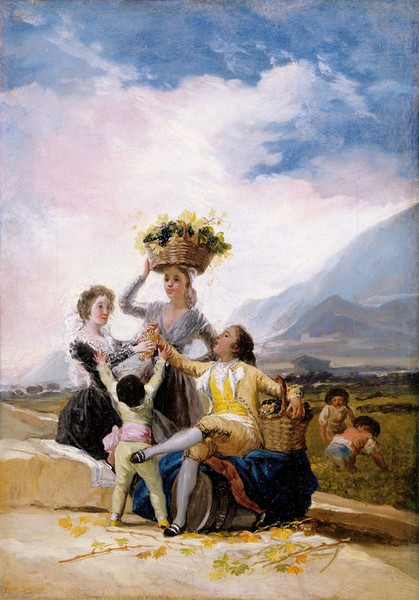 This sketch was acquired by the ninth Duke of Osuna in 1799. The ducal household put it on sale and it was bought by Baron Charles-Jean-Marie Alquier, of Versailles. It was later inherited by Baron René (?) Alquier, who sold it to the collection of Knoedler & Co., New York. Robert Sterling Clark bought it in March 1939 for his collection based in Upperville, Virginia, and from there it entered the collection of the Clark Art Institute when this museum opened its doors in 1955.

The sketch for Autumn is shrouded in a great deal of confusion. Although several of the sketches that Goya made were sold to the ninth Duke of Osuna, and in that sale the four seasons were mentioned, Yriarte reports this piece's absence from said collection when he had the opportunity to visit it before it was sold off due to the bankruptcy of the ducal household. The same writer suggested that the missing sketch was actually one held by the Goupils in their Paris collection, after they had acquired it from Ángel Tadeo. The whereabouts of this sketch are today unknown and it is very different from the one conserved in Williamstown, since the description given by Yriarte bears no resemblance to the painting. However, many writers, including Gudiol, Gassier and Wilson, have continued to make reference to the bibliography that ties the Paris sketch to the American one.

Soria believes that this painting is a copy of the cartoon, made by Goya's Valencian disciple, Asensio Juliá. Arnaiz points out that Soria's hypothesis cannot be corroborated but he assures that the differences between this piece and the other sketches in the same four seasons series are evident and he claims that Goya's authorship should be seriously questioned.

The differences that we can see between the supposed sketch and the finished work are that here the figure of the majo is seated on a barrel rather than a low wall, and the bunch of grapes is white rather than black.