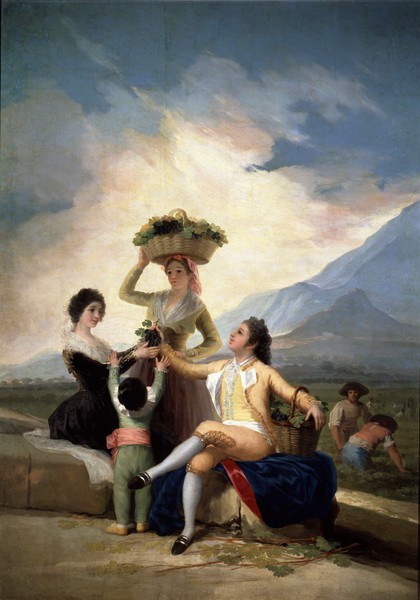 The tapestry of The Grape Harvest would have hung on the south wall of the room, flanking a door with its pair, The Flower Girls, or Spring.

The scene shows some figures in the foreground who dominate the space and the anecdotal subject matter of the grape harvest: an elegant majo who is offering a bunch of grapes to a girl, a young boy with his back to the viewer, reaching up to grab them, and a peasant girl with a basket balanced on her head. Behind them, in the middle distance, appear the figures of more peasants working, and in the background we see a mountainous landscape, which could be the mountains around Madrid.

Bozal says of this cartoon's composition that it is "an authentic review of Goya's painting to date", referring to his genre paintings. The work keeps the pyramid arrangement that the artist began to use in cartoons such as The Drinker and The Parasol. In the case of The Grape Harvest, however, this, the neoclassical arrangement par excellence, breaks away from neoclassicism in the way that Goya combines it with a strongly contrasting distribution of the different planes.

In the centre of the composition we find the grapes, and, just as occurred with the flower in the cartoon of The Flower Girls, the grape here symbolizes this cartoon's season: autumn. Tomlinson offers a further interpretation of this fruit's appearance in the work. At times, the grape has been seen as a representation of the autumn of man, of maturity, and as such, the writer also sees in this painting the three ages of man. Grapes are also thought to symbolize fertility.

Ezquerra del Bayo supposed that the Duke and Duchess of Alba invited Goya and his wife and son to spend some days in their house at Piedrahita, and as such he identifies the aristocrats in the painting as the duke and duchess, the peasant girl as Josefa Bayeu and the boy as the artist's own child. Sambricio proved that this was not possible by citing a letter that Goya wrote to Martín Zapater around those dates, in which he speaks of being in Madrid. What's more, his name appears on several occasions as one of those present at the sessions of the Royal Academy of Fine Arts of San Fernando.