Goya to his Doctor Arrieta (Goya a su médico Arrieta) 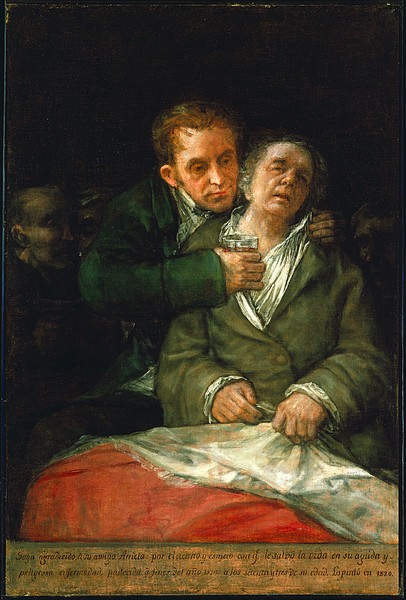 Goya agradecido, á su amigo Arrieta: por el acierto y esmero con q.e le salvó la vida en su agúda y- / peligrosa enfermedad, padecida á fines del año 1819, a los setenta y tres años de su edad. Lo pinto en 1820. ("Goya gives thanks to his friend Arrieta: for the expert care with which he saved his life from an acute and dangerous illness which he suffered at the close of the year 1819 when he was seventy-three years old. He painted it in 1820." In the cap

In 1819 Goya suffered a serious illness (probably typhoid fever) which nearly ended his life. Thanks to the care given by his doctor, Arrieta, he regained his health and went on to live another eight years. As a gesture of his thanks, the artist dedicated this portrait to his doctor. It was painted in the Quinta del Sordo, where Goya lived at the time, isolated from the court.

The painting belonged first of all to Arrieta himself. It was later in the collections of J. J. Martínez Espinosa, in Madrid; of M. A. Ajuna Temple, Paris; of Dr. Edwards-Lucas-Moreno, Paris; of Seligman, New York; and of M. Knoedler & Co., also in New York. It was acquired by the Minneapolis Institute of Arts in 1952.

Eugenio García Arrieta (Cuéllar, Segovia, 1770-Africa?), brother of the writer Agustín García Arrieta, is well-known thanks to this portrait, in which he appears alongside Goya himself. Little more is known about his life except that, in 1820, after having saved Goya's life, he was sent by the government to study the Eastern Plague along the coast of Africa, where he probably died.

In this portrait we see Goya in his bed, in pain and suffering, as the fatigued expression on his face clearly indicates. He has a lost look on his face and his mouth hangs half open, as if simply breathing had become a huge effort. His skin is white, with touches of dull grey, and his hair - also grey - is dishevelled. He is wearing a greyish dressing gown over the top of a white nightshirt. His weak, hesitant hands are trying to cover himself with the blanket, which is a bright red colour. Doctor Arrieta is helping him to sit up, supporting him from behind and raising a glass, containing a pinkish substance, to his lips. The doctor is wearing a deep green jacket, white shirt and black trousers. The distribution of the two figures, with Arrieta holding up Goya, recalls the religious compositions of the Pietà, but we can also relate it back to secular works by Goya, such as The Injured Mason.

In the background, a series of figures are just visible, almost blending into the darkness. It has been suggested that these could be Goya's friends and family members, accompanying him during his illness, but another interpretation identifies them as the Parcae, the Fates, holding the thread of the dying painter's life. The appearance of these figures introduces a new dimension to the painting. Whilst the self-portrait of Goya and the portrait of Arrieta are realistic ones, the mysterious figures behind them, only vaguely defined, come from the realm of the fantastic and, more specifically, from that of nightmares. The lighting acts as a barrier between the two worlds, since only the foreground is lit, leaving the background in darkness. These imaginary elements bring the work closer to the Black Paintings, on which Goya may have already started work by his time. The proximity of death and the agony he would have been suffering could also have suggested the presence of monstrous beings to Goya, as in his painting of Saint Francis Borgia Assisting a Dying Man, which was the first occasion in which Goya introduced a demon-like figure into one of his works.

The painting's inscription, emphasizing his gratitude to the doctor, gives this work the appearance of an ex-voto. It turns the eighteenth-century tradition of criticizing doctors, formerly thought to be quacks and allies of the Parcae when death was near, on its head. This was a tradition that Goya himself had earlier played with in the print Of what will he die?, from his Caprices series. In this work, not only is the Doctor Arrieta no ignorant phony, but his humanity shines through.

Two copies of this highly original work were made by Goya's disciple, Asensio Juliá. They are of identical dimensions, since the Valencian painter made them in Goya's studio. Desparmet provided the information about the whereabouts of these two copies: one was in the collection of Mrs Galardi de Quintano, in Irún, and the other was in the Moret y Remisa collection, in Madrid.