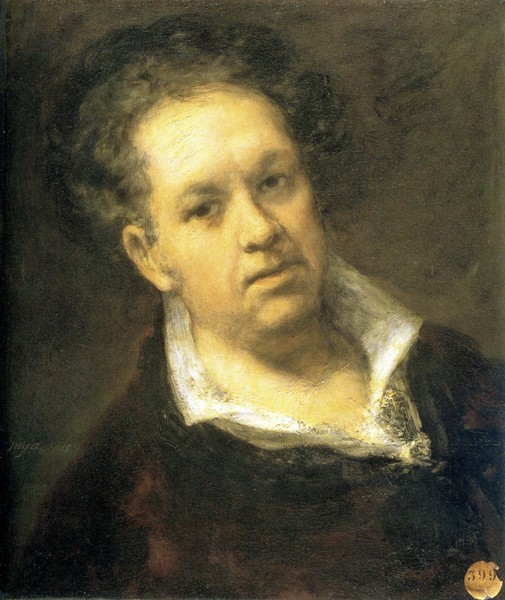 Traditionally, it was believed that the self-portrait now in the Prado Museum was a copy of this one. Today, however, we know that both works were executed in 1815, although we do not know which of the two was painted first, or what were the artist's reasons for making them.

In the inventory of the property of the Quinta del Sordo made by the painter Brugada in 1828 (DESPARMET, L'œuvre..., 1928-50, t. I, p. 53), a bust self-portrait of Goya is listed, and appears to correspond to this work. It went to Javier Goya, who reached an agreement with the academy that, once the outstanding accounts they held with his father had been settled, he would deliver them this self-portrait by Goya. In 1829, Javier Goya received the payment for the equestrian portrait of Ferdinand VII that the institution had commissioned in 1808, and he gave this self-portrait to the academy.

This self-portrait, at first glance so similar to the one in the Prado, is in fact quite different. The compositional differences are minimal, with the head being tilted to one side more in this work, almost drawing a diagonal line, as if the painter were peeking over the top of his easel. Although his hair is shorter here, he is wearing the same clothes: dark gown and white shirt with the collar open, revealing part of his chest. Also, just as in the other self-portrait, the painter is looking straight out at the viewer. But this Goya is not ill, nor tired, nor as aged as the one in the Prado. Even at the age of sixty-nine, his skin is firm, rosier and more youthful than in the other work. The expression on his face, with a half smile playing around the corners of his mouth, reflects a certain sense of joy, as if he were ready for whatever obstacle the world had to throw at him, thanks to the many that he had already overcome by this time. The paint is applied more thickly here, most visible in the white shirt collar, which resembles a lacy adornment, and also evident on the left-hand side of the forehead. Here the background is of an impenetrable black, drawing the head and neck of Goya out in sharp relief.