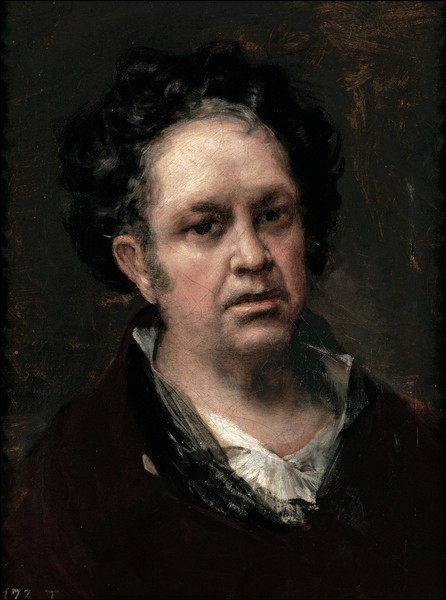 It is not known whether Goya made this self-portrait for himself or for someone in his close circle of family and friends, or whether it was actually a commissioned work. It used to be thought that this work was a copy of the self-portrait at the Royal Academy of Fine Arts of San Fernando, signed and dated 1815. After the work was recently cleaned, however, it was discovered that this painting also had an inscription, according it a certain official status. The fact that two such similar works exist, both of them signed and dated, and considering that the academy work was delivered by Javier Goya following his father's death, suggests that perhaps this work was also meant for one of the fine arts academies of which Goya was a member, such as those of Valencia or Zaragoza, but never reached its destination.

Brugada's inventory of Goya's assets, completed after the artist's death, includes two bust portraits of the painter. It seems that one of them corresponds to the academy one, and so perhaps the other corresponds to this work. It belonged to Javier Goya, who sold it to Román Garreta or Román de la Huerta. The correct identification of the buyer is complicated by the fact that different documents list his name in different ways. We know that in 1866, by a Royal Order dated 5 April, the Museum of La Trinidad paid the owner the sum of four hundred escudos for the portrait. In 1872, with the merging of the Museum of La Trinidad and the Royal Museum, the work became the property of the National Painting and Sculpture Museum, now the Prado Museum.

Of all the known self-portraits of Goya, this one, together with the version in the Academy of San Fernando, is one of the most sincere and direct. It is a bust portrait depicting the painter at the age of sixty-nine, in front of a dark, brown-hued background, where the marks of the swirling brushstrokes are clearly visible. Goya has painted himself wrapped in a gown, similar to the one his disciple, Asensio Julià, wears in his portrait, and from beneath which the white shirt, with its clearly repainted collar, pokes out. All of the portrait's intensity is concentrated on the facial features, with little attention paid to the clothing or background. The artist's head is turned slightly to the left. His face, framed by the wayward and now greying hair which leaves his forehead uncovered, is looking almost straight out at the viewer. He looks tired, sickly and somewhat nostalgic. Despite this, his gaze transmits the determination and fortitude of someone who has overcome many different obstacles in the course of his long life, and he appears calm and even proud and dignified. The main difference between this self-portrait and its companion piece in the Academy of San Fernando is the artist's posture and mood.