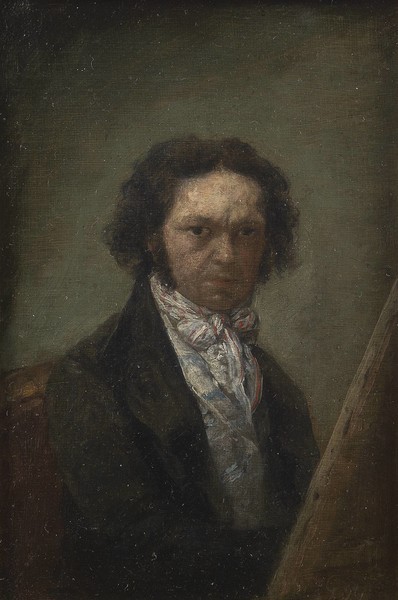 This work belonged to the Duchess of Alba. After her death in 1802, it went to Tomás de Berganza, of Madrid, who left it to his son, Luis de Berganza, also of Madrid. Later it belonged to Carmen Berganza de Martín, Madrid; Pilar Martín Berganza, Madrid; and Antonio Martín. It was sold at E. Peel y Asociados, Madrid, on 31 October 1989 and entered the Gutiérrez de Calderón collection.

It came to form part of the collection of the Prado Museum partially in lieu of taxes and the Villaescusa bequest of 1995.

Goya painted himself as many other artists, including Durero, Rubens and Rembrandt had done before him, and as Picasso would do much later. Fifteen self-portraits by Goya are known to exist, with the artist first painting these works at a very young age.

This particular one was painted when he was around fifty years of age. It shows the top half of the artist as he sits in front of a canvas, ready to start work on a new painting. His eyes stare out at the viewer, and his face reflects the intense concentration that the painter needed to produce his works. The face is gently lit on the forehead, with the cheeks falling somewhat into shadow. His brow is slightly creased, his hair left long, with a centre parting that gives him a pre-Romantic air. He is wearing a dark frock coat and has a scarf tied around his neck, the lighter tones and pink and blue touches of which bring light to the composition.

The background, although neutral, just as in the majority of the painter's portraits, does feature certain light effects.

The brushstrokes are very fast and confident.

Juliet Wilson says of this self-portrait that it is a genuinely emotive image of the painter, exquisitely painted, and revealing at once both the strength and the sensitivity, the innate self-confidence and the dignity of an artist who was able to see and understand all.