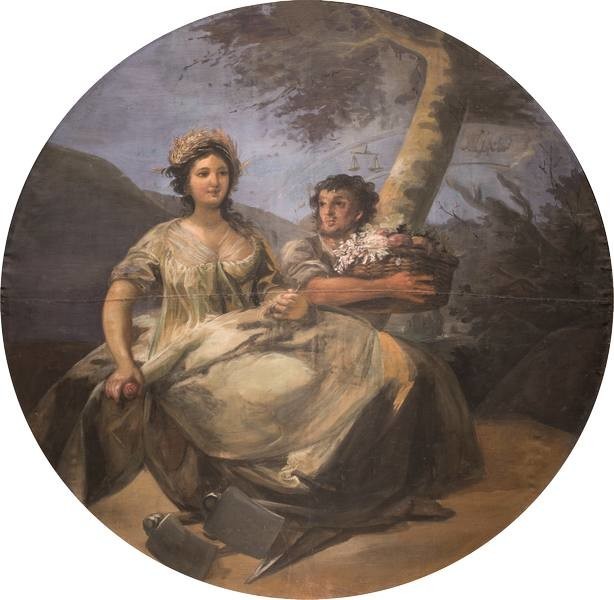 The King and Queen of Spain gave Manuel Godoy a palace when he was appointed Prime Minister in 1792. From 1801, Godoy carried out a series of renovations to the palace, which were not completely finished until 1806. Meanwhile, he commissioned Goya to produce three circular allegorical paintings to decorate the interior - Agriculture, Industry, Commerce, and Science - which were hung in the hallway opposite the large staircase. Only three of these paintings survive today.

In 1932, they were entrusted to the Prado Museum as a bequest from the Ministry of the Marine.

The choice of themes for the four allegories was not fortuitous. Godoy wished to represent the pillars of the Enlightenment economy, demonstrating that he formed a part of this modern political thought. The paintings were hung above the lunettes of the vault of the hall, the anteroom of the great staircase where visitors waited to meet the influential favourite of Charles IV, and the ideal place to present political propaganda. In fact, thanks to photographs taken by Moreno, we know the exact position of each painting. Industry was on the eastern wall, opposite the staircase and Science, which was placed on the western wall. On the other sides of the hall, Agriculture hung on the north wall, and Commerce on the south. The room of the Prado Museum which houses these paintings today maintains their positions with the exception of Science, which has been lost.

As in the case of many other paintings by Goya, Agriculture was inspired by Cesare Ripa's Iconologia, and shows the goddess Ceres as she described in his book: a woman dressed in green, wearing a crown of ears of grain, a fertility symbol. At her feet, Goya has placed farming tools, an allusion to work in the countryside. This monumental goddess of agriculture is holding an apple in her right hand, a wheat sheaf in her left. She is accompanied by a peasant who is placed in the middle ground of the composition. He carries an offering of a basket full of flowers and fruit, and is admiring the beauty of the goddess. We can make out the symbols of the zodiac Libra and Scorpio in the sky, representing the harvest season. The composition is similar to the Rubens and Snyder work entitled Ceres and Pan (Prado Museum, Madrid) which Goya would have seen in the Palacio de Oriente in Madrid.

This work, as in the case of its companions, is painted in tempera, which gives it the feel of a fresco painting. There are many compositional likenesses to the tapestry cartoons, in particular the overdoors which were also designed to be viewed from below. Goya once more places a triangular figure in the foreground, adding a second in the middle ground in order to create a sense of depth. In the cartoons he often introduced an element between both figures, but in these compositions he uses light to distinguish the different planes, leaving the furthest away in the shadows.