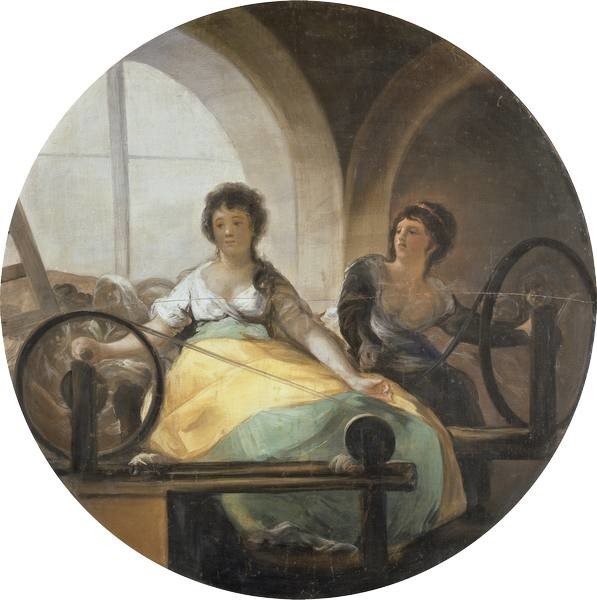 Goya chose to represent a realistic scene for the allegory of Industry. Two women are working in a factory which could be the tapestry factory of Santa Bárbara, since they are shown working with looms, and it was a place which Goya doubtless knew very well. The main figure in the scene is notable for her melancholy expression and distant gaze, while her companion is looking at her, wondering what she is thinking about. Goya painted a window behind them, but the light which hits the figures is made to look as if it comes from the real skylight located high up in the vault of the hallway of Godoy's palace. The light, which is cold and grey, creates a rather dark and sad atmosphere in which the yellow and green of the main weaver's dress stand out as the most intense colours in this palette.

Opposite the window there is a group of women who are executed in almost grisaille tones, probably in order to give them an otherworldly feel. They are looking at the sad girl. According to Manuela Mena, these could be the Fates; weavers of the thread of life, they are the rulers of human destiny - in this case, the destiny of this girl. This work has with reason been linked to the The Spinners by Velázquez, since as well as representing women weaving, it also has a mythological element. It is inevitable that we should assume that Goya got the idea for representing mythological subjects in everyday scenes from works such as The Spinners, or The Drunkards (by the same artist: both paintings are housed in the Prado Museum, Madrid).

A more earthly interpretation has been made of this painting to do with prostitution: it is a well-known fact that many prostitutes learned the trade of spinning thanks to the support of some enlightened politicians who promoted the training of these women. The mood of the workers we see here, as well as their profession, fits in with this idea. It would not be the only time that Goya dealt with this subject (see drawing no. 84 from Album B, San Fernando, How they Spin!).

For more information on the whole series, see Agriculture.