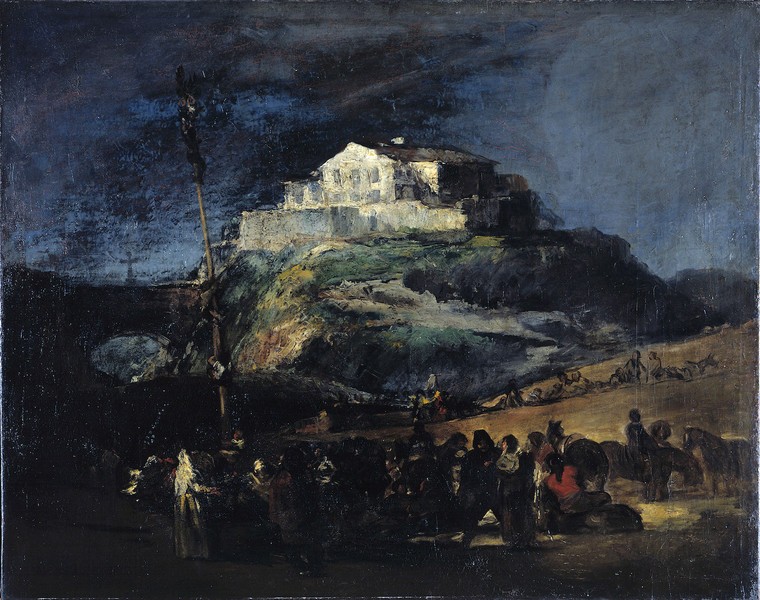 This work forms part of the series of paintings inherited by Javier Goya in 1812. It also belonged to the Count of Tamames, in Madrid.

It was brought to light by Manuel Gómez Moreno in the 1946 Bulletin of the Royal Academy of History (Boletín de la Real Academia de la Historia).

According to the inventory carried out by the notary Brugada in 1812, following the death of Josefa Bayeu, there were four paintings which bore the inscription "X.1". Of these paintings, three have been identified: the present work, The Greasy Pole, plus Procession in Valencia and Bullfight in the Ring. This inventory points out that the works are all similar, possibly because they were all made during the same period, using an analogous technique and on very similar size canvases. In the execution of these paintings it is quite likely that Goya would have used split reeds, thus obtaining an effect similar to that achieved by applying the paint using a spatula.

In the foreground we see a group of people crowded around a greasy pole or cockaigne, which is being climbed by three figures, one of whom has almost reached the very top, where a prize of food awaits him. In the landscape in the background we can see a bridge and, further away, a cross. Elsewhere, on a hill, there stands a white building, most likely either a farmhouse or a monastery.

Goya has painted this scene using very dark colours, creating an unsettling atmosphere. Ominous storm clouds threaten overhead and we can see how the darkness is creeping up upon the people watching the spectacle. The most brightly lit part of the painting is the building perched on top of the hill. Both the building's architecture and the hill on which it stands recall, in the way in which they are isolated from the rest of the scene, the work entitled City on a Rock, in which the buildings are even more separated and independent from their surroundings than in the present work.

The subject matter of The Greasy Pole had already been addressed by Goya in one of his tapestry cartoons. In this later work, however, there is no longer any sign of the festive atmosphere or the brightness of the cartoon.