The Flight to Egypt (La huida a Egipto) 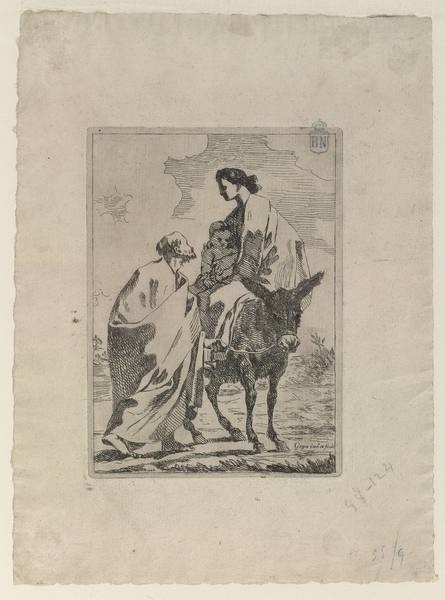 This print is part of a small series made up of three etchings and two preparatory drawings that Francisco de Goya worked on throughout the 1770s and into the early 1780s.

Seven or eight copies of this print have survived, all of them sharing the same characteristics, suggesting that they were a small print run rather than state proofs.

This set of images by Goya, all on religious themes, consists of three prints, The Flight to Egypt, Saint Isidore the Labourer and Saint Francis of Paola, and the two preparatory drawings for these last two prints. The fact that they were executed quite some time apart reveals the progress made by the painter, thanks both to his increasing maturity as an artist and to his gradually growing knowledge of the technique of etching.

It is likely that Goya's first foray into printmaking was made at the workshop of José Luzán (Zaragoza, 1710-Zaragoza, 1785), although we can safely assume that his earlier stay in Italy (1769-1771) would have given him the opportunity to see the work of Battista Piranesi (Mogliano Veneto, Treviso, 1720-Rome, 1778), who had a studio permanently set up on Rome's Via Felice, now the Via Sistina. The central location of this space - very close to the Piazza di Spagna, a place well known to the Spanish artists training in Rome - makes it fairly likely that the young Goya would have been able to see in person the working methods of the Venetian artist. Equally active on the Roman scene at the time were two other printmakers: Domenico Cunego (Verona, 1724/1725-Rome, 1803) and Giuseppe Vasi (Corleone, Sicily, 1710-Rome, 1782), with whom Piranesi himself had trained. It was almost certainly this creative atmosphere that inspired Goya's first prints, which he started to work on soon after returning to Spain, in the second half of 1771. As such, we can state that the present religious images represent the genesis of Goya's graphical work, and his first contact with the technique of etching, which he was to work with throughout his life, exploring the technical and the expressive possibilities that the medium had to offer.

We do not know why Goya decided to make this collection of religious images. It could be that he decided to do some work on commission for one of the fraternities, churches or convents that often requested these kinds of devotional images, which they later sold in their sacristies and entranceways. This would have made a sensible working arrangement for Goya at the beginning of his career, since devotional images like these were always in demand. If he had continued in this line of work, Goya would have been able to gain a foothold in a market which was giving work to many of the first artists who had trained at Madrid's Royal Academy of Fine Arts of San Fernando.

The Flight to Egypt, the first known print by Goya, is signed by the artist in the Italian style, thus reinforcing the suspicion that it may have been executed during his stay in that country, just as Harris proposes. In the work, the Virgin is sat sideways on a donkey, holding the Infant Christ in her arms. Despite being positioned in the centre of the scene, the child is shown in shadow. Saint Joseph, in profile, is holding the donkey's halter as he looks up at Mary. Goya uses only a few lines to construct the figures, leaving both the drapery and the faces of the figures only superficially finished. The shadows and the body of the animal are created using a grid-like pattern of short, confident - though somewhat regular and monotonous - lines, and hardly any reference is made to the landscape in which the scene is taking place. The clumsiness of Goya's technique betrays his inexperience and well as how difficult he has found it to give the figures any real sense of volume. This first print epitomizes his status as an apprentice printmaker.

The image is imbued with the serene classicism of the paintings of Carlo Maratti (Camerano, Ancona, 1625-Rome, 1713), who tackled the theme of The Flight to Egypt for one of his very first commissions in the city, in the church of Sant'Isidoro in Rome (Ca. 1652), situated near to the Piazza Barberini. Although Goya has a different take on the scene, the figure of the Virgin and the rendering of the clothes worn by the figures, with their large folds of fabric, have certain parallels with the work by Maratti. Similarly, Wilson-Bareau points out the analogies between the classicism of the characters who appear in the frescoes at the Carthusian monastery of Aula Dei, in Zaragoza, and the figures in this image by Goya.

This same theme also interested one of Goya's contemporaries, the painter José del Castillo (Madrid, 1737-Madrid, 1793), who in 1784 made a print copy of a painting by Luca Giordano (Naples, 1634-Naples, 1705) which, as he himself tells us at the bottom of the image, used to hang in Buen Retiro Palace.