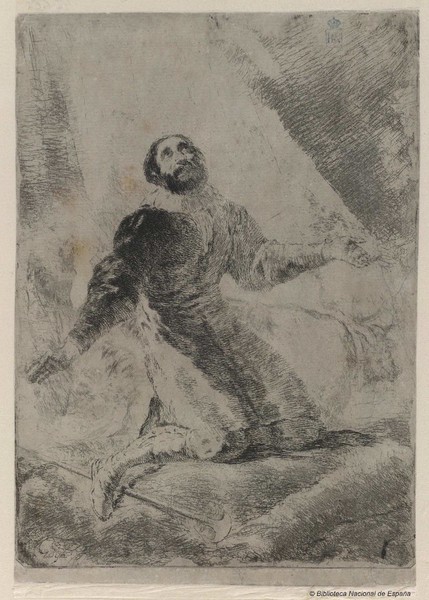 Cronología
Ca. 1778 - 1782
Dimensiones
230 x 168 mm
Técnica y soporte
Etching and drypoint on laid paper. Plate with corners cut off. The print has been retouched by hand

This one-off proof came from the Valentín Carderera Collection and is now in the National Library in Madrid. The reason that only this one proof has survived is that Goya discarded the plate after seeing that he had failed to resolve the foul bite problem in the background.

This etching, belonging to the series on religious subjects, shows Goya handling the technique of etching more deftly than in The Flight to Egypt. Here we see Madrid's patron saint kneeling to pray, with his arms held out in the shape of the cross, and the flank of an animal off to one side. Behind, Goya has engraved a yoke of oxen led by an angel, whose wings can only just be made out in the impression. The figure of the saint is lit up by a ray of light that falls down from above. San Isidore is looking upwards, his eyes turned to heaven in an attitude of prayer, in keeping with the position of his arms and recalling the painting Christ on the Mount of Olives as well as the first engraving in the Disasters of War series. Goya has rendered the saint's clothing using short horizontal lines which become more intense in the centre of his body and on his left shoulder.

Dating this work presents some difficulties but two pieces of information allow us to establish its time of execution to around the end of the 1770s. The first clue is that it was on exactly the 15th November 1779 that, according to the Gazeta de Madrid, the remains of Saint Isidore the Labourer were transferred to the church of El Sacramento in Madrid. The second piece of information that points to Goya having made this work around that time is the discovery, on the back of the proof ofSaint Isidore the Labourer, of a black pencil study of Velázquez's portrait of the Infante Balthasar Charles on horseback. Goya made a print of this work by the Sevillian master which was published in December 1778 and it is likely that he would have made a preliminary drawing first and then reused it later for the first proof of Saint Isidore.

This etching has recently undergone restoration work and been removed from the support which it was previously stuck to. This made it possible to view the sketch that Goya made of Velázquez’s equestrian portrait of Prince Balthasar Charles.