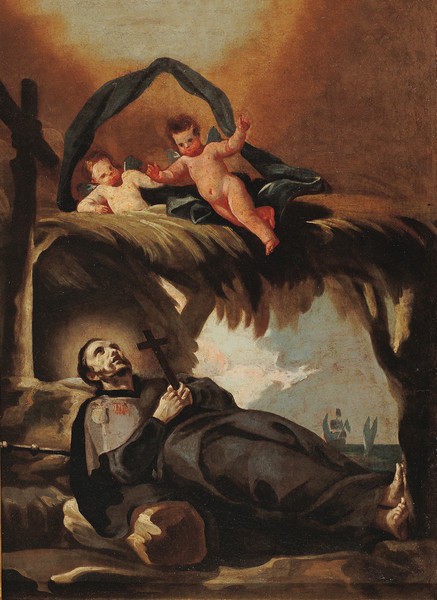 This work was presumably created for one of Goya's relatives as a devotional painting. It was inherited by Ms. Francisca Lucientes, a descendent of his uncle Miguel, his mother's brother.

The Museum of Zaragoza acquired the canvas from the Lucientes family in 1926, together with another dedicated to the Virgin of the Pillar.

This dramatic scene, clearly divided into two sections - upper and lower - bears witness to the death of Saint Francis Xavier in 1552 on the Chinese island of Sangchuan, where he had been abandoned by the Portuguese who used to trade with the Chinese. In the background we can make out a ship, while the dying saint is pictured clutching a wooden cross, lying beneath an improvised shelter of palms guarded by the two putti which dominate the upper part of the canvas.

The work is executed in rapid, flowing brushstrokes. The face and the hands stand out as they are illuminated. The overlaying of light on dark gives depth to the painting.

The painting was acquired by the Museum of Zaragoza under the title Discovery of the Body of Saint James (Invención del cuerpo de Santiago), an incorrect identification based on the pilgrim's cloak worn by the saint and the shell hanging from his shoulder. However, under this cloak the saint wears the habit of the Jesuits, confirming his affiliation with that order.

A preparatory sketch for this painting can be found in the Italian Sketchbook, which proves its authenticity, although the artist did modify the original basic concept.

In terms of the painting's provenance, its identical size and the similarities between the putti in this work and those of the Virgin of the Pillar, also housed in the Museum of Zaragoza, suggest that they are a pair.

The painting has a reddish base which shows through in certain areas of the work. It has been relined.

It underwent restoration work in the workshops of the Museum of Zaragoza, and the severe craquelure which the painting had suffered – as is the case of other paintings from this period of Goya's career, including its companion painting, the Virgin of the Pillar – was corrected.