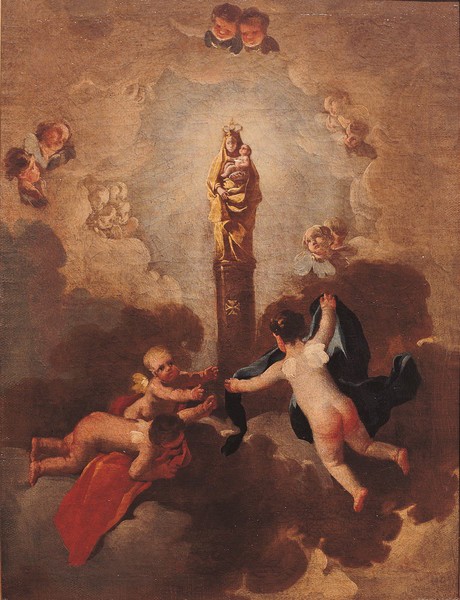 This work was presumably created for one of Goya's relatives as a devotional painting. It was inherited by Ms. Francisca Lucientes, a descendent of his uncle Miguel, his mother's brother.

The Royal Academy of Noble and Fine Arts of San Luis acquired the canvas from the Lucientes family in 1926, together with another dedicated to the death of Saint Francis Xavier, and both works were entrusted to the Museum of Zaragoza.

The Virgin of the Pillar is placed at the centre of the composition, standing out against the ray of light which she herself is emitting. The painting has the air of a sketch, the shapes being described with the tip of the brush. The virgin is raised up on the holy column, surrounded by a host of putti which fly around her. Other little angel heads melt into the background, moving into grisaille tones and blurring into the clouds. The painting is dominated by pastel tones which sweeten the scene, giving it a rococo character.

A preparatory sketch for this painting can be found in the Italian Sketchbook, which proves its authenticity, although the artist did modify the original basic concept.

The painting has caused some confusion regarding its date and dimensions. The majority of studies record its dimensions as being 78 x 52 cm, when in fact the work is smaller than that. With regard to dating, Antonio Beltrán proposes a date of 1775-1780, Camón and Buendía bring that forward to 1773, while Gudiol believes this to be an earlier work from 1780-1781. Today, it is considered to have been completed in Zaragoza following the artist's return from Italy in 1771 but before his move to Madrid in 1775. This chronology is supported by the sketch found in the Italian Sketchbook.

In terms of the painting's provenance, its identical size and the similarities between the putti in this work and The Death of Saint Francis Xavier, also housed in the Museum of Zaragoza, suggest that they are a pair.

This painting underwent restoration work at the Institute of Conservation and Restoration of Cultural Property (ICRBC) in Madrid in 1982. The piece displayed severe craquelure and blistering in its layers which had caused the loss of some of the paintwork.

As a result, it was necessary to clean the image, allowing the recovery of the original tones, while the heads of two putti were reconstructed using the regattino technique.