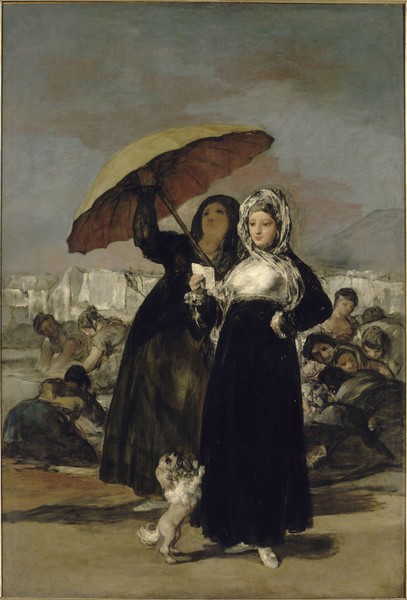 This work was bought from Javier Goya in 1825 for the Spanish Gallery of Louis-Philippe of Orleans. It was sold, along with other works from the collection, at auction in Christie's of London in 1853 for the sum of 21 pounds (lot no. 353). It was acquired by Durlacher. In 1873 it was bought by subscription from the merchant Warneck, and entrusted to the Lille museum. It entered the collection along with Old Women or Time. However, the paintings do not form a pair: they were carried out at different times and are of different sizes, despite the expansion suffered by the canvas Old Women.

A woman in a black dress and white bodice, her head covered with an elegant scarf, stops under the bright sunshine to read a letter while at her feet a dog tries to get her attention. At her side, her companion, dressed entirely in black, opens a parasol which shades her from the sun. Behind these figures we can observe a group of women doing some washing. The composition is divided into two parts by the washing line full of white clothing. Below, we can see the washer women, whose figures are delineated with strong black curves, in contrast with their facial features which are barely sketched in. Above the line of the washing, the heads of the women in the foreground stand out against the blue sky, as does the yellow parasol which contrasts strongly with the indigo of the sky.

We are ostensibly before a genre painting, very much in keeping with those Goya produced in which he revived the figure of the maja or fashionable young woman, as in Majas on a Balcony or Maja and Celestina.

Nevertheless, some authors have looked to find a portrait of a real person in the main figure in this scene, and Gassier posits that this woman represents the young Leocadia Weiss. Based on the intimate relationship which Goya had with this woman, some authors have also suggested that this painting is an allegory of seduction, emphasized by the light which falls on the covered chest of the main figure.