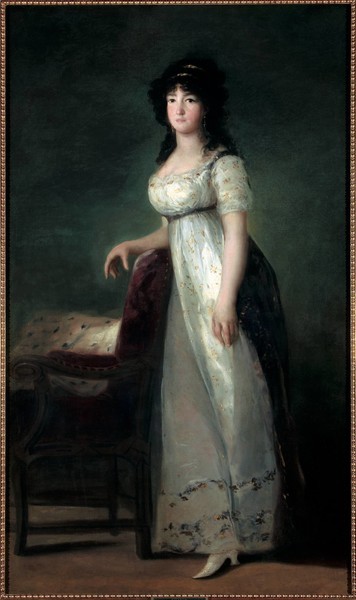 This work came from the collection of the Count and Countess of Montijo.

Doña María Gabriela Palafox y Portocarrero (1779-1828) was the daughter of Don Felipe Palafox y Croy and Doña María Francisca de Sales y Portocarrero, Countess of Montijo. She was the sister of the Marchioness of Villafranca and the Count of Teba, both of whom Goya also painted.

The subject, who was twenty-five years old when Goya painted her, is shown standing with her right arm resting on the back of the armchair in front of her, which also holds an ermine skin. Her left arm is hanging down at her side. The picture gives the sensation that the figure is emerging from the dark background behind, her elegant dress of white silk shimmering in the light. This empire-line garment, with its gold embroidery and short sleeves, accentuates the woman's bust. Poking out underneath the bottom of the dress is one of her feet, wearing a pointed white shoe that matches the rest of the outfit. Her curly black hair falls down over her shoulders and is adorned with two simple diadems.

From the left-hand side, a bright light illuminates her face, neckline, arms and part of her dress.

Her face gives us a certain sense of distance but it also appears that her pose for the artist is a natural one.