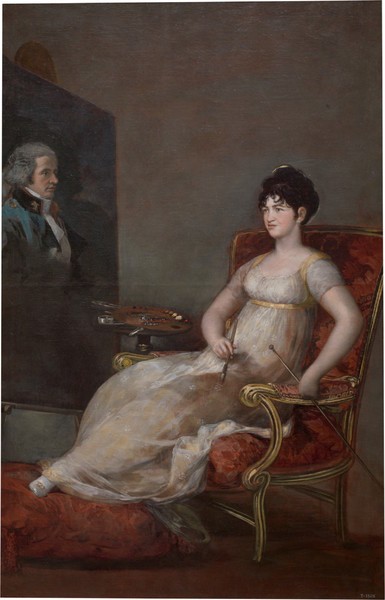 Before being bequeathed to the Prado Museum by Alonso Álvarez de Toledo, XXI Count of Niebla and XV Marquis of Los Vélez, this work remained in the possession of his widow until her death in 1926. It entered the collection of the Prado Museum in May 1926.

María Tomasa Palafox y Portocarrrero (Madrid, 1870-Naples, 1835) was the 12th Marchioness of Villafranca and Duchess of Medina Sidonia. She was the sister of the Marchioness of Lazán and the Count of Teba, both also painted by Goya.

As a child, she received a careful upbringing from her mother, the Countess of Montijo. She was named academician of merit of the Royal Academy of Fine Arts of San Fernando in 1805.

Goya depicts this woman at her most artistic, painting a portrait of her husband, Francisco de Borja Álvarez de Toledo y Gonzaga, who had inherited the title of Marquis of Villafranca following the death of his brother, the Duke of Alba.

The marchioness is shown seated in a large armchair upholstered in red velvet, with her feet resting on a large cushion. She is wearing an elegant gauze dress in the Paris fashion and satin shoes. In her hands she holds the brushes she has used to paint the portrait of her husband, who appears to be looking straight at her and whose face almost appears more real than that of the marchioness herself.

According to Manuela Mena, from a technical point of view, this portrait marks a milestone in Goya's evolution in the 19th century. We can see how he had left behind the preciousness of his eighteenth-century works, and his brushstrokes are now more energetic and visible.