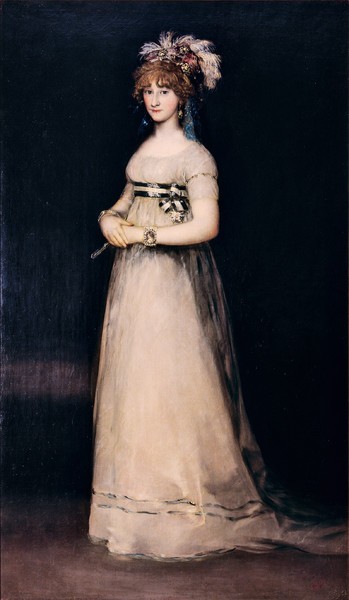 This work was in the family residence of the Palace of Boadilla del Monte (Madrid). It came into the possession of the Duke of Sueca and was inherited by Prince Francesco Ruspoli di Cerveteri, in whose collection it was documented in 1904. It entered the Uffizi Gallery in 1972.

Goya painted María Teresa de Bourbon y Vallabriga on several occasions during his stays at Arenas de San Pedro (Ávila). The first time was when she was four years old, then came the group portrait of the family , and later by herself with the Gredos mountains in the background (María Teresa de Borbón) and again in the painting in which Goya painted her seated and which now belongs to the Prado Museum. This last work bears an especially close formal resemblance to the one analysed here.

This full-length portrait depicts the fifteenth Countess of Chinchón standing in front of a dark, neutral background. Her body is turned slightly to one side and she holds a fan in her hands, one of which is resting on top of the other. She is wearing a long airy white dress, with pinkish coloured sheer layers, low-cut and with short sleeves. Her curly hair is gathered up into a headdress with feathers and a blue bow, which hangs down behind her head. The only signs of her social standing are the discretely worn sash and starry cross of the Order of María Luisa, which she was awarded in 1800, along with some jewellery (bracelet, necklace and earrings).

The subject is gazing coyly out at the viewer, with a shy smile on her lips, her posture emphasizing the official nature of the portrait. The portrait is remarkable for the tenderness and subtlety of its execution, both in the psychological insight achieved by the artist and in his treatment of the textures of the clothing.

The restoration work done for the Goya e Italia exhibition, in Zaragoza, provided an opportunity to eliminate some previous retouching work that was affecting the background on the right-hand side. An x-ray of the painting revealed, in the lower part of the figure, a sketch of one or two heads which, according to Joan Sureda, are similar in appearance to the caricatured faces of Goya’s Caprices.