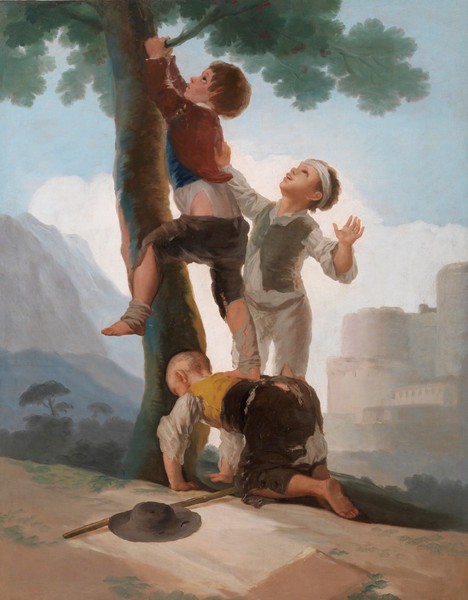 Boys Climbing a Tree is an overdoor piece, the companion of The See-Saw and Chicken Fights.

In the image we see three boys trying to climb a tree. One of them crouches on all fours so that another can stand on his back, whilst the third pushes him upwards.

The composition is very similar to that of another tapestry cartoon, Boys Picking Fruit, an overdoor made for the series that adorned the dining room of the Prince in the palace of El Pardo in 1778. The intervening years between the two paintings allow us to see the evolution that Goya has undergone: now space is articulated through the figure itself and its position, rather than through multiple planes. The images are clearer in order to make them easier to read, with overcrowding avoided.

As with its companion overdoor pieces, Tomlinson interprets this painting as a representation of the political instability that Spain was suffering following the French Revolution.