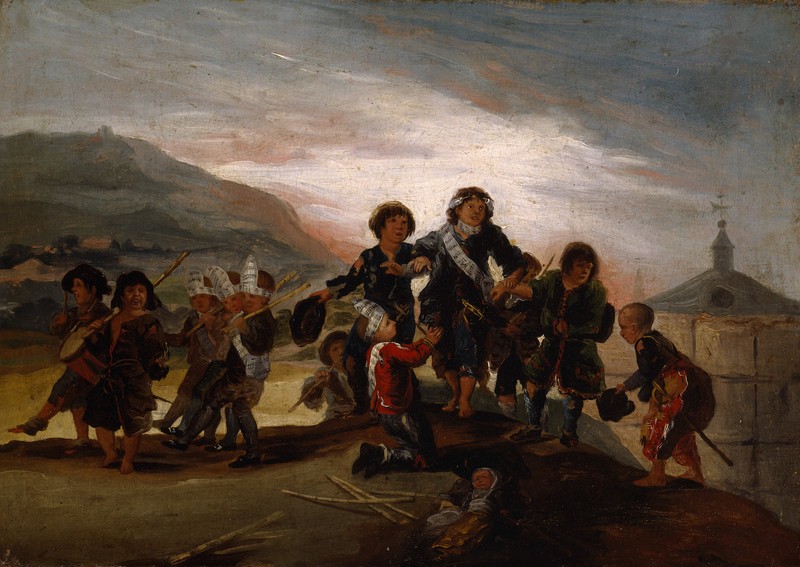 Before arriving at the Madrid museum where it is now housed, this painting belonged to the London collection of Anne Maxwell Macdonald.

Between 1777 and 1785, coinciding with his work for the Royal Tapestry Factory of Santa Bárbara, Goya produced a series of oil paintings on the theme of children's games, all of them of very similar dimensions. Sambricio has suggested that these works could be a set of sketches for tapestry cartoons. However, we can probably rule out this hypothesis considering the complexity of the scenes, which would have made their subsequent conversion into tapestries difficult. They are more likely canvases in their own right, perhaps made to order, and of which various copies exist, probably executed by Goya's assistants. Such work would have provided a valuable source of income for the Aragonese artist, who was at the time still at the beginning of his career. Moreover, the fact that there exist more than one copy of each of the oil paintings that make up the series suggests that these works, thanks to their agreeable subject matter, achieved some modest success. They would have been ideal for decorating the homes of well-off members of society.

As for the sources that inspired this group of works, we should consider the possibility that Goya may have been familiar with the costumbrista paintings of Pedro Núñez Villacencio (Seville, Ca. 1635-Seville, 1700). He may even have had the opportunity to see some of the paintings by David Teniers the Younger (Antwerp, 1610-Brussels, 1690) which had been used at the Royal Textile Factory of Santa Bárbara.

In 1842, fourteen years after Goya's death, the existence of this series of pictures came to light when four of them were acquired in Seville by William Stirling-Maxwell, of Pollok, Glasgow (Kenmure, 1818-Kenmure, 1878). The Santamarca collection holds six more paintings from the same series, adding two new titles (Children Playing at Soldiers and Children Playing at Bullfighting) to the four which had been acquired by the Scottish historian and collector.

In Children Playing at Soldiers we see a group of children on a hilltop, having fun imitating grown-ups. Despite his ragged clothes, the boy in the centre of the composition is impersonating a king, surrounded by other children who are pretending to be his vassals. One of them is even kneeling before the pretend king, perhaps swearing his allegiance. To the left of this group, five boys dressed as soldiers are marching.

Between 1778 and 1779, Goya had painted a tapestry cartoon with the same title (Prado Museum, Madrid) . The differences between the present work and the cartoon centre around the fact that the children in the cartoon belong to a higher social class, as we can see from their clothes and their carefree attitude. In addition, in the cartoon the children are playing in a much more open setting, perhaps a reflection of their financial well-being. In the work painted later, however, we can see a veiled criticism of the social and political reality of the time, especially in the submissive pose of the child who is kneeling before the pretend monarch.

There exist two more copies of Children Playing at Soldiers, one in the collection of the Santamarca Foundation, in Madrid, and the other in the Maxwell Mac-Donald collection, London.