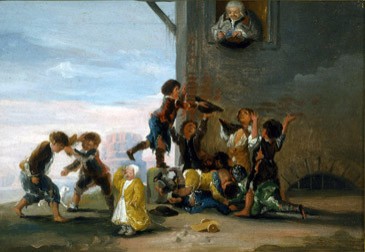 This canvas formed part of a group of oil paintings depicting different children's games, acquired in Spain in 1842 by Sir William Stirling Maxwell.

Several children are using their hats to try and catch the chestnuts which a man is throwing out to them from a window. At the same time, other children are playing and fighting, paying little attention to their playmates. One boy, smaller than the others and wearing a yellow dressing gown, is crying as he pulls along a toy wooden cart on a string.

The scene is set outdoors and in front of a background painted using sky blue and pinkish brushstrokes. Overall, the scene is somewhat brighter than those depicted in the other paintings in this same series of children at play. In the background we can see some ruined buildings.

There exists a copy of Children Fighting Over Chestnuts at the Santamarca Foundation, Madrid.