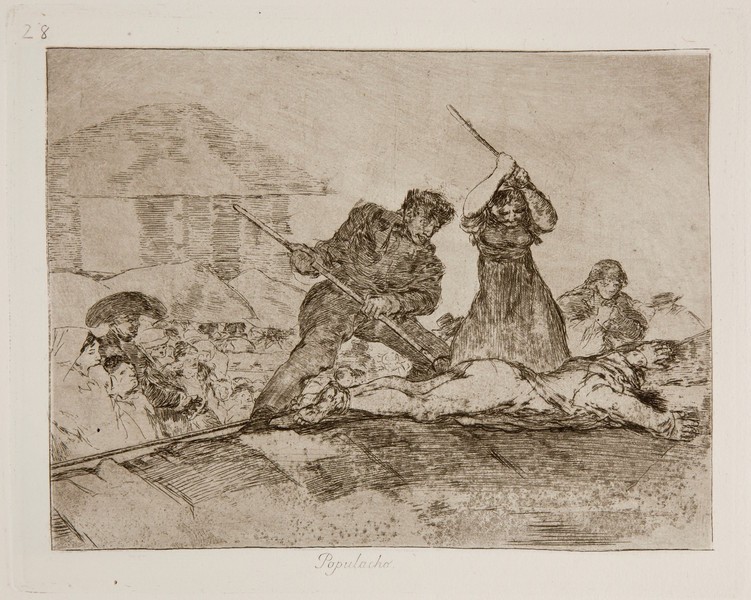 An afrancesado or perhaps a French soldier is being beaten before the enthusiastic and rather indifferent gaze of a crowd of people, including a priest wearing a saturn hat. The victim's feet are tied together and the upper part of his body is exposed. A man and woman are giving their victim a brutal beating, the woman beating him with a rod while the man uses a half moon or crescent staff, a tool used to cut the tendons of bulls. The posture of the body of the man under attack makes it look like they are actually beating a dead body.

The exultant mob that vents its fury against the enemy, who in this case may already be dead, is the same crowd that often faced up to the French invaders in an improvised, risky stand with the brutality that Goya captures in this print. The painter's critical attitude towards this type of popular, extremely violent action is shown in the faces of the protagonists. The man using the half moon has a faraway look, a lost expression as if he were motivated by an irrational impulse. The artist also criticises the inaction of the crowd, which is perhaps so accustomed to witnessing this kind of scene that they no longer feel disgusted or repelled.

This print may have links to the death of the Marquis of Perales, a young aristocrat who was unjustly accused of supporting Joseph Bonaparte (Corte, 1768 - Florence, 1844). However, it is also possible that we are before a generic scene, since this kind of violent event must have been very common in times of war.

Mob is closely linked to the following print, He Deserved It,in which Goya once again depicts a violent scene peopled by a raving crowd.

The plate is stored in the National Chalcography (cat. 279)