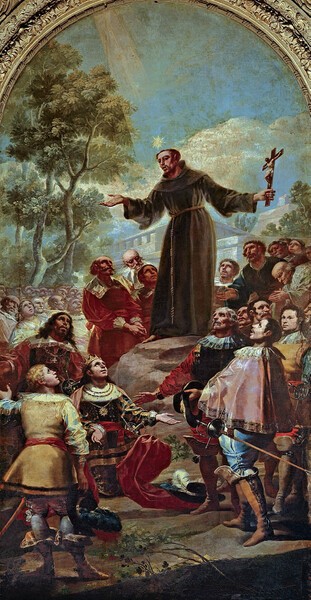 On 20 July 1781 Goya and other court painters received a commission from the Count of Floridablanca to produce artwork for the Basilica of San Francisco El Grande.

It was a source of great joy for Goya to receive the commission, since he was feeling very downhearted following the problems he had experienced with his brothers-in-law in Zaragoza. In a letter to his close friend Zapater dated 14 July 1781 we can read the famous comment: "I burn when I think of Zaragoza and painting". Thus, his inclusion on the list of participants for the decoration of the church, from which his brother-in-law Ramón was absent, caused him great happiness.

The other painters taking part in the commission apart from Goya were Francisco Bayeu, Andrés de la Calleja, José del Castillo, Mariano Salvador Maella, Gregorio Ferro, and Antonio González Velázquez. It is very likely that the recommendation of Goya made by Juan Martín de Goicoechea to the Count of Floridablanca had a lot to do with his selection.

Goya worked on the sketches for his work during the summer of 1781, and in September he already had a definitive design ready.

Goya was assigned the third chapel on the Epistle side of the church, while no particular subject was expressly specified for the work. On 22 September he wrote to the Count to inform him of his chosen subject and deliver the first draft. On 23 December the Count sent the artist royal approval of the sketch, and Goya, along with José del Castillo and Gregorio Ferro (the three painters not on the court payroll) were each paid 6,000 reales.

On 11 January 1783 all the works were already hanging over their respective altars, although they were covered up and still unfinished: in 1784 the painter told Zapater that he was putting the finishing touches to his work.

On 25 April 1785, Goya, Ferro, and Castillo requested further payment from the Count for the effort and time invested in their works. Antonio Ponz supported the artists' petition, and on 21 June 1785 the Count authorized a second payment of 4,000 reales for each painter, although he added: "the paintings are not so great, although these are the least bad of them".

The scene represents the miracle which took place during the sermon Saint Bernardine gave before Alfonso V of Aragón and his court, when a star fell from the heavens to land on the head of the Franciscan monk. For the altarpiece for the church of the novitiate of the Company of Jesus the artist took inspiration from the Preaching of Saint Francis Regis by Michel-Ange Houasse (Prado Museum, Madrid). With regard to the depiction of King Alfonso in this scene we must make a clarification. In the letter Goya wrote to the Count of Floridablanca on 22 September informing him of the subject he had chosen for the painting, he mentions Renato, King of Sicily, and the painting was initially entitled Saint Bernardine Preaching before King Renato of Sicily. During the time of the saint's sermons in Naples, the King was disputing the territories of Alfonso V. Carlos III was his descendent, also born in Naples. Goya must have been informed of this, and substituted Renato for Alphonse.

According to Mayer, this work is a fusion of a commemorative portrait and religious/historical painting. In fact, Goya also painted his self portrait on the right-hand side in an image which is repeated in the self portrait housed in the Agen Museum, France. The work features certain anachronisms, such as in the clothing worn by the figures. Goya dispensed with some baroque devices which were almost obligatory in this kind of work, such as the "break of glory". The artist preferred to compose a scene full of academic details, hence the pyramidal structure, various planes of depth, groupings of the figures, and subtle use of landscape, as highlighted by Lafuente.