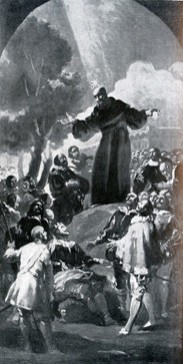 We know of the existence of two small sketches and another larger one for the altar painting for the Royal Basilica of San Francisco el Grande in Madrid which Goya dedicated to Saint Bernardine of Siena. It is very likely that this version is the small sketch which Goya mentioned in a letter sent on 22 September 1781 to Count Floridablanca informing him of the subject he had chosen for the work. It is also possible that it is the version sent by Goya to Martín Zapater which he mentions in his correspondence with his friend.

It is followed by another sketch of almost exactly the same dimensions whose execution is rather more polished. Both were found to be in the possession of the Marquis of la Torrecilla in Madrid in 1867, and they later passed to the Count of Villagonzalo, also in Madrid. These works have only been on display to the public twice: in Madrid in 1900, and London in 1920. Their current location is unknown.

The surviving sketches allow us to study the evolution of Goya's ideas for the composition. We can see that in this sketch the characteristics of the figures were not yet fully defined, although the compositional idea and the inclusion of the star which rests on the head of the saint had already been established. The essential elements of the composition are represented by means of an intense yet simple chiaroscuro. It is reminiscent of Michel-Ange Houasse's Preaching of Saint Francis Regis (Prado Museum, Madrid), to which Goya had access.