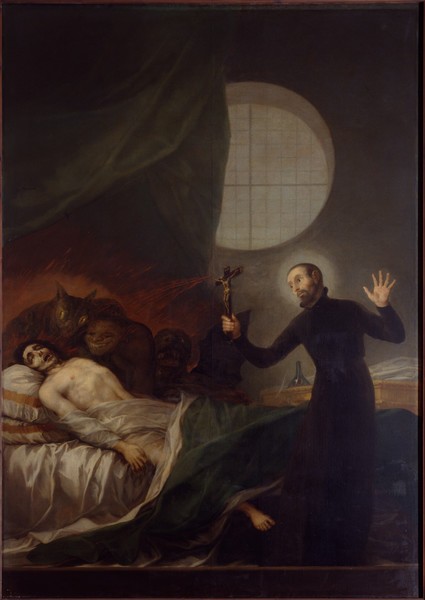 Between 1787 and 1788 the Countess-Duchess of Benavente and Gandía (and Duchess of Osuna) sponsored the renovation of the chapel under her patronage in Valencia Cathedral. The chapel is dedicated to Saint Francis Borgia, her illustrious ancestor, who was the Duke of Gandia and Marquis of Lombay. The first artist to work on the chapel was the Valencian painter Mariano Salvador Maella, author of the main painting of the altar, Conversion of Saint Francis Borgia. Later, Goya was commissioned to paint the two lateral paintings. On 16 October 1788 the paintings must have already been finished, since on this date Goya issued the Duchess with a bill for the work to the sum of 30,000 reales.

The scene narrates one of the most popular themes in Jesuit iconography. The setting is a dark room, lit only by a circular window half-covered by a curtain. On the right, at a prudent distance from the sick man, we can see Saint Francis Borgia dressed in a simple black habit and holding a crucifix as if it were a weapon, spraying forth the blood of Christ to attack the demons which possess the dying blasphemer. In the saint's face, framed by a halo, we can read fear, and his body leans in the same way as the figure of Bernardine of Siena in Goya's canvas depicting his sermon in the Church of San Francisco el Grande in Madrid.

The image is fully immersed in the most obscurantist Spanish tradition, and has enjoyed great popularity since it is in this work that the fantastic monsters so typical of Goya's imagination first make an appearance. The artist has substituted the putti which usually accompany his religious figures for brutish monsters, letting his imagination run wild, a prelude to the work of his later years.

The body of the dying man also shows traces of the style used in the execution of the figures in his Black Paintings. His chest is swollen, holding the demon with whom the saint does battle for the soul of the unfortunate man. His face and the colour of his skin have the look of someone already dead.

Camón was surprised by the huge difference between different works by Goya carried out almost at the same time, and contrasts this work with the paintings housed in the convent of Benedictine nuns in Valladolid, which are so sweet in comparison with the violence and expressiveness of this painting.

There is no doubt that the precursor of expressionism already reveals himself in this work, without the need to hide beneath the decorous compositions - by no means of a lesser quality - which some of his patrons demanded.