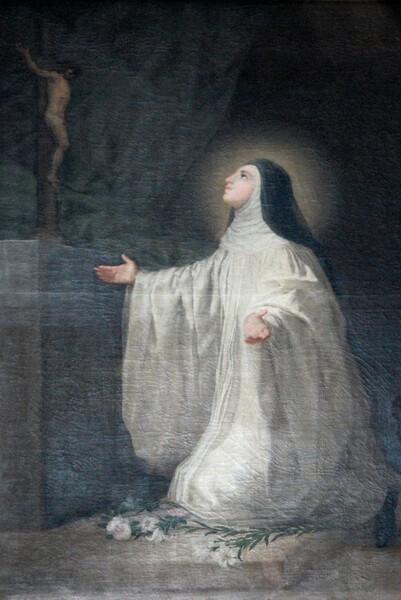 Saint Lutgardis was a nun of the Benedictine Order (she actually came to the monastery as a follower of Saint Bernard, but later moved on to a Cistercian Monastery, also governed by the Rule of Saint Benedict, where she developed her mysticism). Lutgardis was taken to the Monastery of Santa Catalina de Tongres at the age of twelve. Her life changed when she was visited by a vision of Jesus Christ showing her his wounded heart, and she became one of the main propagators of the devotion to the Sacred Heart. From then on, she lived a very austere existence, and had numerous mystic experiences during her long meditations.

The scene depicts the saint in ecstasy, contemplating the crucifix above her. Her arms are outstretched in a gesture of surrender while she gazes enraptured at Christ.

The composition is very austere. Lutgardis wears a habit which shines against the dark, empty background, as if symbolizing her soul: the only elements in the composition are Christ and flowers representing her purity - roses and Madonna lilies - which are scattered around the saint.

For more information on the whole series, see Transition of Saint Joseph.