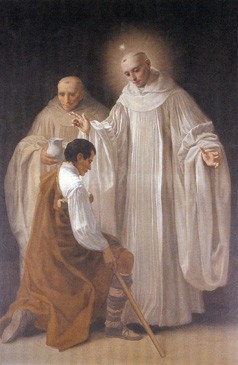 Although this work has been given various titles by academics, they all agree that the main figure in this scene represents Saint Bernard, the most important Cistercian saint. There is no doubt that this scene depicts one of the miraculous healings which he carried out in Milan when blessing the bread and water which the needy brought to him (Vita prima of Saint Bernard, book II, chapter III, § 15) emphasising the saint's ability to perform miracles.

In this painting Goya reaches the heights of the architectural style which he refers to in his letter to Goicoechea, the neoclassical as seen through the eyes of Goya. Moving away from baroque models to approach the academicism of Sabatini, he makes reference to the great painter Zurbarán, whose influence is evident in the naturalism of these figures.

For more information on the whole series, seeTransition of Saint Joseph.