They avail themselves (Se aprovechan) 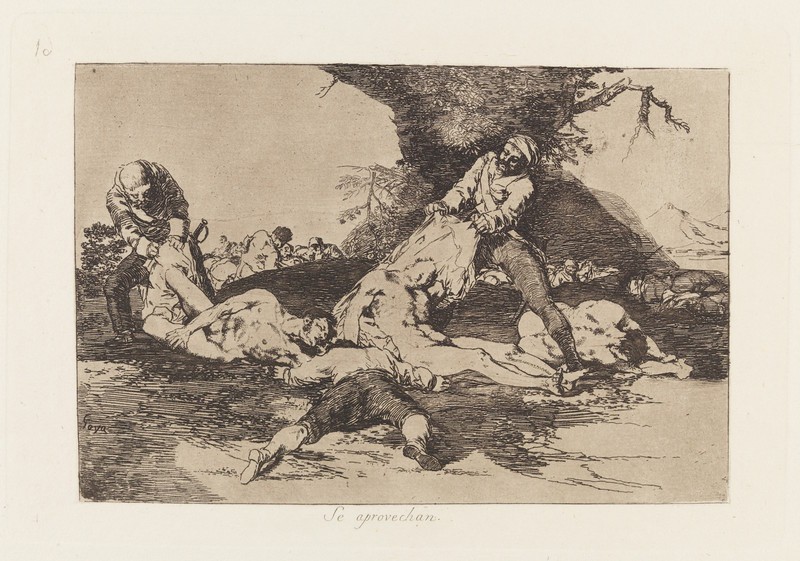 The first state proof reveals traces of burin on the bald head of the man on the left-hand side and on the hair of the naked figure lying on his side in the centre. Before the addition of the lettering, burnished lavis has been used, burin has been used to do some retouching on the ground, and the signature has been added, just above the lower left-hand corner.

In the second state proof we can see how the etched lines on the ground have been burnished just above and below the legs of the figure being stripped of his shirt. Touches of burin have been used to strengthen the burnished etching lines.

In the countryside, in broad daylight, two French soldiers are stripping the clothes from the dead bodies of some Spaniards recently killed in battle. In front of a large tree lies another, already stripped corpse and in the background, on the left-hand side, we can see two other figures, also perhaps engaged in this same task. Goya has skilfully depicted the anatomies of the corpses, which stand out thanks to the accuracy with which they are rendered and the brightness of the white paper showing through.

Situations of this type must have been relatively common during the war. It is the moment in which the fallen are plundered for their material belongings and, simultaneously, utterly deprived of their dignity. In this instance, just as we can see in other etchings in the series, the natural surroundings are inhospitable and arid. The tree placed in the centre of the composition has provided no shelter for the bodies of the fallen Spaniards, and its sharp, jagged shapes only serve to heighten the sensation of horror.

The etching plate is conserved in the National Chalcography Museum (cat. 267)