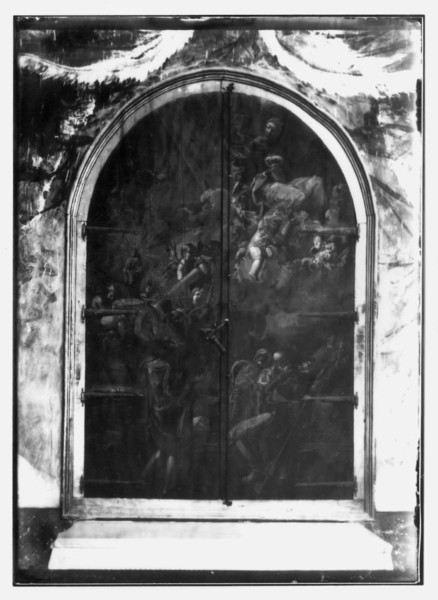 In around 1762 or 1763, Goya was commissioned to decorate the doors of the reliquary in the parish church of Fuendetodos (Zaragoza), and the wall in which they were set.

The piece was destroyed during the Spanish Civil War of 1936-39.

The outside of the reliquary doors in Fuendetodos was decorated with this painting depicting the Virgin of the Pillar arriving in Zaragoza. On the inside of the doors Goya painted the Virgin of Mount Carmel on the left, and Saint Francis of Paula on the right. On church walls surrounding the reliquary, Goya also painted a canopy of ostentatious curtains held back by angels.

The work was probably painted in imitation of the Sacristy doors in la Seo Cathedral in Zaragoza, decorated by José Luzán in 1757.

The scene on the outside of the reliquary shows the Virgin arriving in Zaragoza and giving the sacred image and the Pillar to the apostle Saint James and the seven converts. The figures in the group are distributed in a zigzag formation, rendering diagonals which give movement to the composition as a whole.

Despite the fact that the painting was large, the sketched design is still evident. Some photos of the painting still exist which allow us to analyse the work. The forms do indeed correspond to the style which Goya was learning at the time - that of Corrado Giaquinto - and it could be said that they contain the seed of his later artistic development.

Guidol highlights a characteristic which is already visible in this early Goya and which the artist would maintain throughout his career: his impeccable sense of volume. He defines forms using light and chiaroscuro. Without a doubt, in this early work we can already detect Goya's confident brushwork and speedy execution.

Francisco Zapater was the first to mention the works carried out on the reliquary in 1868. He said that the old people of Fuendetodos remembered Goya as a child making sketches of figures, painting the drapery which frames the reliquary al fresco, and the doors in oils. They also recalled that when Goya returned to his home town in 1808 and saw his early work, he exclaimed: "Don't tell me that I painted this!"