And it can’t be helped (Y no hai remedio) 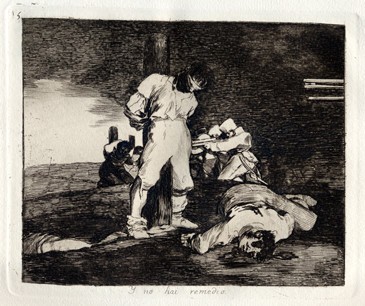 In the first state proof of this etching drypoint is used in the figures in the foreground, in the soldiers taking aim in the background, and in the fallen figure just visible on the left-hand side. This same figure is emphasized with the burin and there is some retouching in the area in the upper-right hand corner, where the etching had bitten too deeply.

In the centre of the composition, in the foreground, we see a blindfolded man tied to a post. This calm, highly dignified figure is waiting, with resignation, his face turned down toward the ground, to be executed by firing squad. Beside him lies the body of another man who has just been killed, the blindfold removed from his face. We can assume that this same blindfold has been reused to cover the face of the man who is now about to be executed in the foreground. Behind him we can see two more posts and two more men, shown in the exact moment in which they are being shot by a row of soldiers, their weapons held aloft.

In this one image, Goya brings together three different phases in the death of these prisoners: the preparation, the moment of the execution, and the resulting corpse. On the right-hand side of the image he has shown the barrels of the soldier's rifles but not the soldiers themselves. Both here and in the background, the executioners' faces remain hidden from view, making it impossible for us to identify them.

The artist has used short, tightly-packed horizontal lines to recreate the sky, the earth, and the posts to which the prisoners are tied. The light areas of the scene are mainly in the spotless clothes of the accused men, alluding to their innocence. In these areas Goya has left the surface almost entirely unworked, adding only some delicate lines to construct the sleeves, the lower part of the trousers, and the shoes. Lit up in this same way is the squad of soldiers in the background, making sure that we do not overlook what is happening in that part of the scene.

This etching is closely related to the previous one, no. 14, The way is hard! , in that these two prints constitute two variations on the same theme, capital punishment. However, in And it can't be helped instead of Spaniards putting Frenchmen to death we see the reverse, with French forces executing Spaniards. In this way Goya shows how the horror is equally present on both sides. The artist finds himself utterly unable to justify the events he depicts, both here and in the previous work. He creates an analogy between these two images, in a similar way to what he did with etchings no. 2, With or without reason and no. 3, The same.

The etching plate is conserved in the National Chalcography Museum (cat. 266)

This etching was made reusing half of the plate which Goya used for his Landscape with Cliff, Buildings and Trees