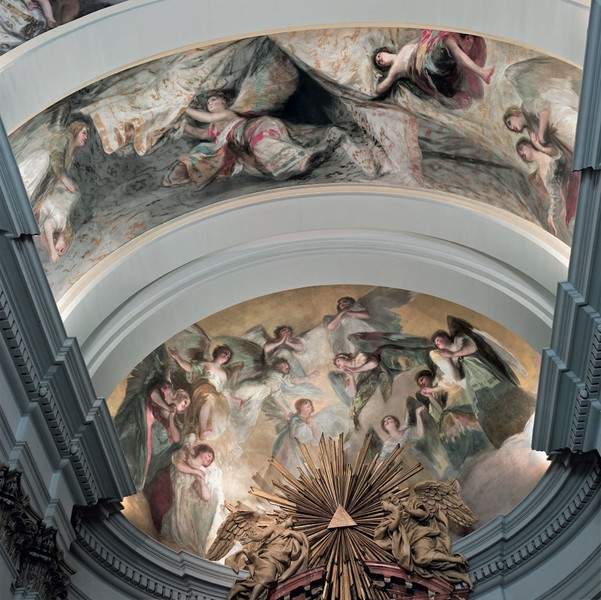 The main altarpiece of the Chapel of San Antonio de la Florida has a top tier comprising a group of sculptures by José Ginés. The sculptures represent the Holy Trinity with rays of light and two seraphim, one on either side. Above this group rises the quarter-sphere vault that covers the apse: this is where Goya painted a group of angels that, together with the angel sculptures, have traditionally been considered to represent a choir of angels singing the praises of the Trinity. However, more recent studies (Carrete, Borrás) have identified the central figure in the white gown as the soul of Saint Anthony ascending to heaven. This means that the other winged figures are not ordinary angels; rather, they are the particular group of heavenly beings know as the Fifth Angelic Choir, the Virtues, which accompany the saint in his ascent. In contrast to representations of allegories related to specific virtues (a common theme at the time), these figures are not depicted with clear iconographic attributes that identify them; instead, the beings accompanying Saint Anthony personify the virtues in an abstract way. Their characteristics, as well as identifying them as angels as the Fifth Choir in the celestial hierarchy, also express the virtues that God gave to Saint Anthony, giving him the power to work miracles, as shown in the miracle scene depicted in the cupola (rec. no. ?). This interpretation also fits in with the leading role given to the different angelic choirs in the novenas (prayers repeated over nine days) dedicated to Saint Anthony of Padua at the time.

Thus, the female aspect of the winged beings corresponds to a rigorously orthodox iconography, and not - as had previously been thought - to some whim of Goya's to represent picturesque female angels.

The light used in the painting is influenced by the sculptures, and it is made to seem as if it shone out of the Holy Trinity, whose rays of light spread out towards the fresco. Likewise, the colour of the base of the apse is tinted yellow where it is touched by the golden light emanating from the group of sculptures.

Since 1910 have been documented several restoration works:

Between 1990 and 2005 by the Ministry of Culture’s Conservation and Restoration Institute.